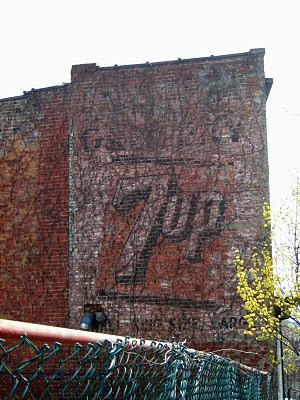 A faded sign for 7-Up on the side of a former grocery store along Madison Avenue east of the Empire State Plaza.
Posted by Paula Lemire at 9:05 AM 1 comment: 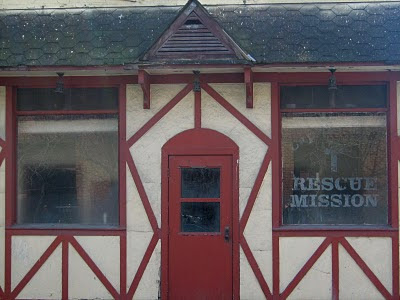 This 19th-century building stands across Hudson Avenue from the Post Office and just around the corner from the Times Union Center (sometimes, I almost still call it the Knickerbocker Arena).

For a long time, 50 Hudson Avenue housed the Capital City Rescue Mission, one of the area's leading homeless shelters. The Mission has long since moved to a more modern facility on South Pearl Street.

Before becoming the City Mission in the 1950s, this building was home to a succession of seedy establishments including a Chinese laundry, a grocery store, an opium den, a brothel, and a tavern patronized by notorious gangster Legs Diamond during Prohibition.

In 1987, a cache of morphine vials (labeled morfina in Spanish) was found packed into a suitcase wrapped in a burlap potato sack and stashed in a high crawlspace here. The brown leather suitcase, filled with wax-sealed amber vials was discovered above the third floor during roof repairs. Authorities were able to date the find by newspapers concealing the vials...the drugs were tucked away, probably by a dealer, in 1921. Just who owned the illicit bottles and why he (or she) never returned for the suitcase is just another mystery...
Posted by Paula Lemire at 5:35 PM No comments: 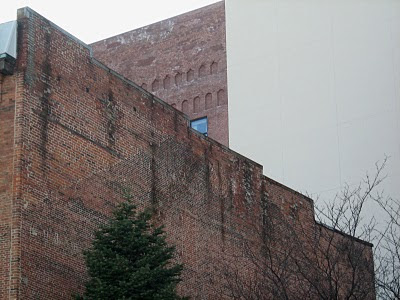 Look closely and you just might see it...the faint outline of a round window on the north wall of Coulson's News on Broadway.

As I wrote in a previous blog, this building just a few steps south of State Street was built around 1814 as a four-story brick commercial building. In the 1850s, another story was added, but if you look closely at the north side, you can still see the outlines of the original gabled roof and, up near the point of the old gable, the circular outline of an old window, too.
Posted by Paula Lemire at 9:56 AM 1 comment: 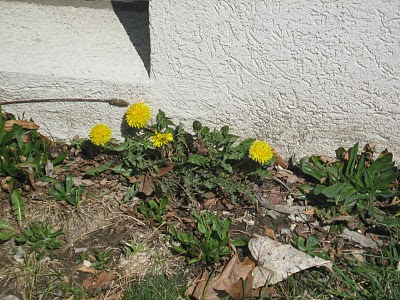 I know that most people consider them weeds or worse, but I like dandelions. They're like tiny suns with their bright bursts of yellow petals. The young dandelion leaves can be quite tasty and very healthy, plus the plants figure in herbal medicine.

I spotted the first dandelions of the season on Elberon Place, just across the street from the Washington Park Lake where I'd been watching ducks bob on the water. Early, but not the earliest I've seen...two years ago, I found dandelions growing near Stuyvesant Plaza in January!
Posted by Paula Lemire at 8:04 AM 2 comments: 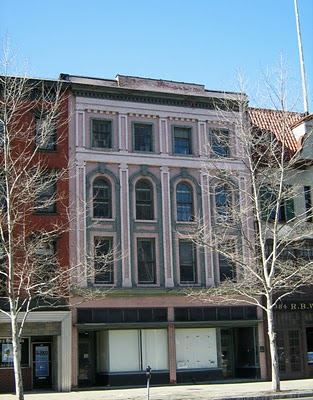 Pink is not my favorite color, least of all for buildings. But, personal taste aside, I do like this 19th-century building along the section of Broadway known as Plaza Row. It stands just south of Coulson's News, the Albany Argus, and an old book store previously featured here.

This stretch of Broadway opposite the ornate Gothic sprawl of the D&H Building is one of the oldest parts of Albany with buildings - or portions of them, at least - dating back as far the 18th-century. The colonial-era Stadt Huys or City Hall stood almost directly across from this building pictured above. Just around the corner on Hudson Avenue, hidden behind a later facade, are the remains of what is now believed to be the oldest house in Albany (and that will be the subject of at least one future post, either here or at my companion blog, Albany NY History).
Posted by Paula Lemire at 9:06 AM 2 comments: 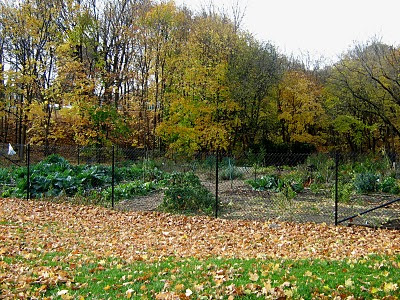 March is sign-up season for the area's Community Garden program. I have my own backyard (which looks more than a little messy at the moment) so I've never taken part in this wonderful program which provides residents with plots in a number of urban gardens throughout Albany, Troy, and Schenectady. It's a great chance for people who do not have garden space of their own to get outside, enjoying working with the earth, and raise fresh vegetables.

This garden is the Charles Shoudy Memorial Garden on Swan Street, just steps away from the lamentably defunct nature trail through Lincoln Park's Beaverkill gully (see my previous posts about that favorite spot of mine) and was taken at the end of last year's growing season.

For more information on the Community Gardens and to sign up for a plot, see their site:

www.cdcg.org
Posted by Paula Lemire at 10:56 AM No comments: 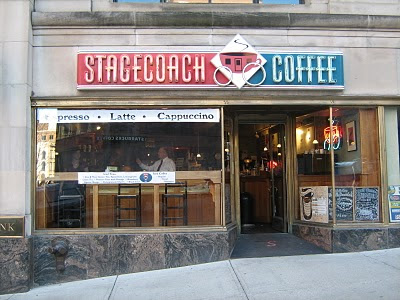 The Stagecoach Coffee on State Street Hill just above Pearl Strees has one of the coolest signs in downtown Albany. And good coffee, too.
Posted by Paula Lemire at 8:13 AM 2 comments: 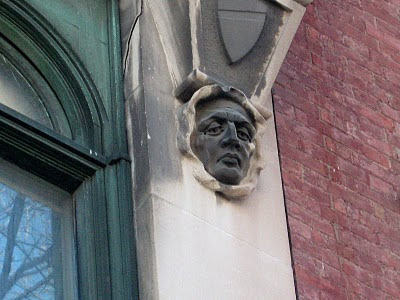 I don't know how I missed this one. I walk past it almost every day and blogged about it just a few weeks ago. But two days ago, walking down State Street Hill, I spotted not one, but two of these glum, but wonderfully expressive carved faces emerging from the facade of The Chatham, just down from The Capitol and Wellington Row.
Posted by Paula Lemire at 8:35 AM 3 comments: 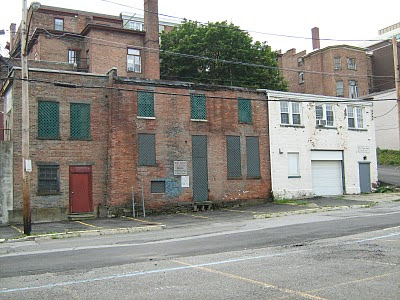 Just off Eagle Street and Columbia Place, these shabby little buildings looking down towards Sheridan Hollow were probably carriage houses for the elegant townhouses that line Elk Street above.
Posted by Paula Lemire at 8:53 AM 1 comment: 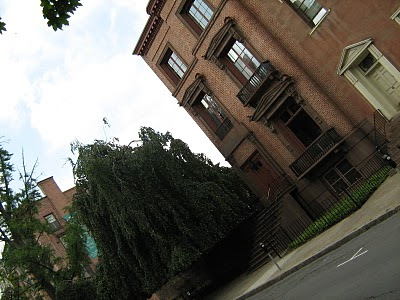 A century ago, Elk Street was one of Albany's handsomest streets. The elegant houses here were home to some of Albany's most notable families such as the Pruyns, Townsends, Vanderpoels, Rathbones, and Van Rensselaers. An aunt of author Henry James lived along this street. Several governors did, too. Franklin Roosevelt lived at Number 4 during his tenure as a state senator.

Today, many of these fine old houses are, for the most part, well-preserved and are occupied by offices.
Posted by Paula Lemire at 9:16 AM No comments: 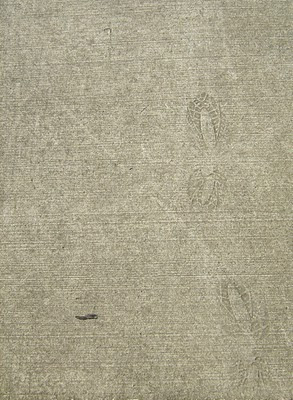 On a recent walk across the Empire State Plaza near the Labyrinth, I spotted these footprints in the pavement.

When the cement was still wet, someone walked across is and left behind the impression of their footsteps...rather like fossilized dinosaur tracks preserved in prehistoric mud.
Posted by Paula Lemire at 9:29 AM No comments:

House of The Rising Sun 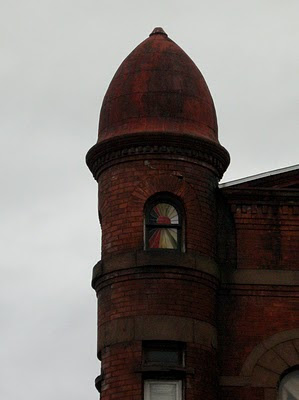 About six weeks ago, while walking a friend to the Chinatown bus pickup on Central Avenue, I spotted this small stained glass window high in the turret of a brick building just a few doors from the Double Happiness bus' storefront office.

I tried several times to photograph the window - a stylized rising sun in shades from white to orange to black - but the light was always wrong. Until yesterday, a cold damp afternoon that wasn't really great for the St. Patrick's Day parade, but perfect for finally getting a picture of this window.
Posted by Paula Lemire at 10:20 AM 1 comment: 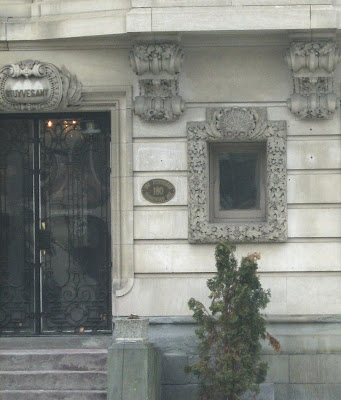 I have to admit that I was quite surprised when I didn't find the 1890 Stuyvesant Apartments included in my favorite "go-to" book for information on Albany buildings, Albany Architecture - A Guide To The City (edited by Diana S. Waite). Granted, not every single structure in the city could be included in a single book, but since other notable buildings along this block of Washington Avenue between Dove and Lark Streets were listed, I did expect to see this one with its wonderful, ornate details...such as those framing a small window on the ground floor.
Posted by Paula Lemire at 9:14 AM No comments:

View on the east side of the New York State Capitol showing part of the monument to Civil War General Philip Sheridan who was born in Albany and the massive crane towering above the northeast corner of the Capitol as part of an ongoing renovation project.
Posted by Paula Lemire at 9:42 AM 1 comment: 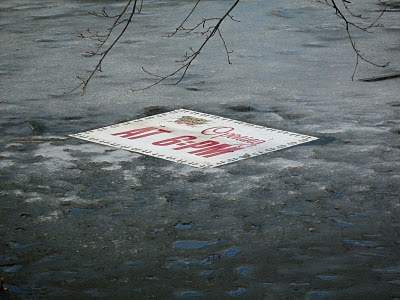 For the past week or so, we've had wonderfully spring-like weather with bright sun and temperatures in the mid-40s to mid-50s. And the rapidly melting ice on the lake in Washington Park revealed a Christmasy relic...a sign from the Holiday Lights In The Park.
Posted by Paula Lemire at 8:44 AM No comments: 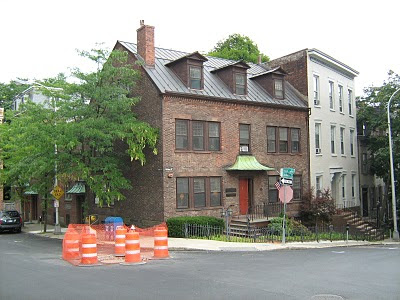 I've always considered this one of the most charming old houses in Albany. Located at the corner of Columbia and Eagle Streets, this brick house was built in 1828 and, for me, conjures up images of a pre-Civil War cityscape.

Just around the corner from the home and studio of sculptor Erastus Palmer, it was built for a bookbinder named William Seymour.
Posted by Paula Lemire at 2:56 PM 1 comment: