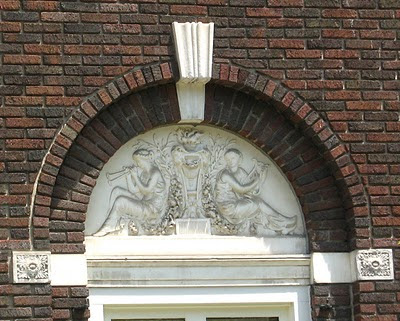 Beautiful architectural detail above a window on lower Elk Street
Posted by Paula Lemire at 9:25 AM 1 comment: 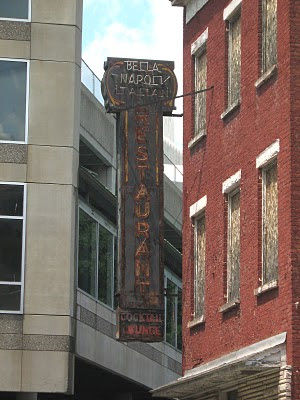 I often use the Times Union Center's enclosed walkway as a shortcut between downtown and the Empire State Plaza (and recommend avoiding the walkway's elevators...they're scary, grimy and the smell is incredibly nightmarish).

When the Center - first called the Knickerbocker Arena and then the Pepsi Arena - was built, entire blocks of Albany's earliest streets and many old buildings were demolished to make way for the new construction. Not quite on the scale of the demolition that preceded the building of the nearby Empire State Plaza, but still a loss to historic preservation.

This block of Beaver Street west of South Pearl Street survived, but became essentially a narrow alley running along the north side of the Times Union Center.

This boarded-up building and its vintage sign stand out for me whenever I use the walkway. Maybe it's because I always liked the phrase "cocktail lounge." Even though I'm not much of a cocktail aficionado, there's some sort of retro elegance to the words. And maybe because it shares the name of a favorite bakery, Bella Napoli out in Latham.

This restaurant was founded in 1916 and remained in the same family for many, many decades. It survived the demolition of the surrounding neighborhood in the 1980s and continued to operate at least through the mid-90s. I'm not sure what year it closed or exactly why, but it's hard to imagine keeping a restaurant profitable in a such an obscured location.

I never actually dined at Bella Napoli, but I rather wish I had since I've come across a few rave reviews for some of their seafood dishes.
Posted by Paula Lemire at 9:11 AM 2 comments: 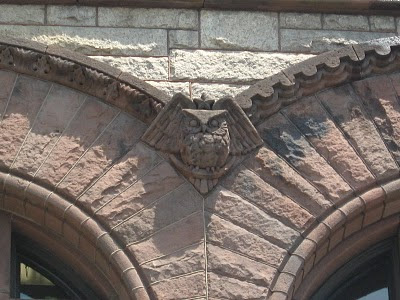 As I've noted before, downtown Albany is liberally peppered with carved faces and other figures on the facades of old buildings and, once you notice one or two, you start spotting them everywhere.

And City Hall has quite a few of these whimsical details. It seems like I discover another one every time I look up at H.H. Richardson's imposing Romanesque building.

This spooky-eyed owl with a star above its heads is perched on what seems to be a slim crescent moon above the windows on the Corning Place side of the building.

Other figures on City Hall:

City Hall Lion
Another Stone Face
Posted by Paula Lemire at 8:45 AM No comments: 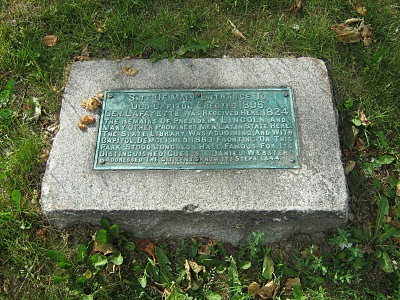 An unassuming, but interesting marker in the East Capitol Park. One of the many Bicentennial plaques scattered around the downtown area, it tells of some of the notable historic figures who spent time at the Old Capitol building which originally stood here.
Posted by Paula Lemire at 10:40 AM No comments: 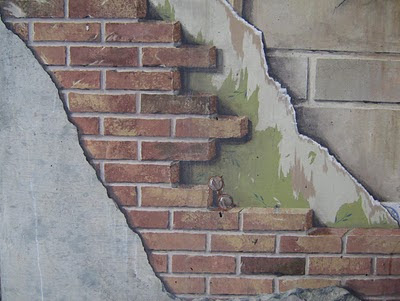 There's a wonderful trompe l'oeil mural tucked under an overpass on Broadway near Orange Street.

The painting cleverly makes it appear as if the concrete wall has cracked away to reveal another wall of bricks which in turn reveals a a plaster wall which then exposes wood framing and a gray masonry wall. Along the way, little things are revealed...a border of delicate blue and white Dutch tiles, an empty bottle of light green glass perched on a jutting brick, a pair of antique books, and the pair of old-fashioned spectacles show above.

It's the work of Albany Mural, a company whose illusionist art appears throughout downtown Albany...including the Maiden Lane pedestrian bridge and the facade of the Albany Public Library's main branch.

For more on Albany Mural, take a look at their site.

http://albanymural.com/trompe_loeil_public_art
Posted by Paula Lemire at 10:13 AM 3 comments: 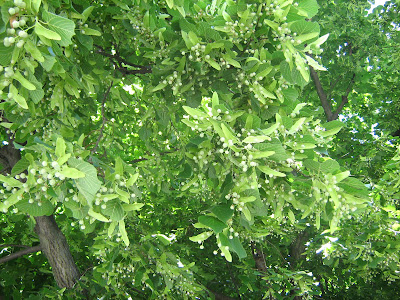 This time of the year, it's impossible to walk down my street without noticing the fresh, slightly sweet scent of linden trees. Not that my street is lined with them. I'd say there's about a half dozen of them, mixed in with maples and a couple of gingkos. The largest of them is just up the street from me by the Metroland offices and, if I open my windows, I can smell it from my room.

According to Huybertie Pruyn Hamlin's memoir, "An Albany Girlhood" (which I highly recommend...it's lack of polished narrative is outweighed by the wonderfully detailed accounts of upper class life in late 19th-century Albany), it was a local Dutch custom to plant a linden tree in front of one's home to commemorate the birth of a first child and, indeed, there was a large linden tree in front of her father's beautiful Elk Street house.
Posted by Paula Lemire at 10:16 AM 4 comments: 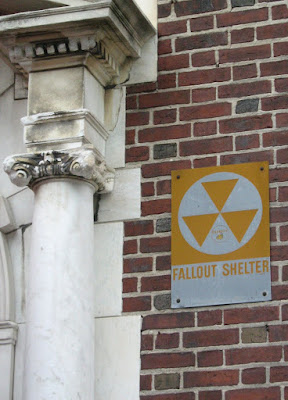 An old Fallout Shelter sign next to the marble-columned entrance of a Willett Street apartment building.

I don't recall the last time I saw one of these Cold War relics, though they were much more common in my childhood. I still remember the drills we had in grade school...filing into double-line against the walls of that long, dim hall at Vincentian Institute. At the time, though, I wasn't quite old enough to connect those drills with signs like this and the Cold War was already in its final stages.
Posted by Paula Lemire at 9:15 AM 2 comments: 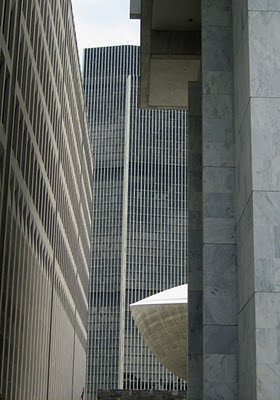 View of the Corning Tower and The Egg as seen from the State Street entrance to the Empire State Plaza's Vietnam Memorial Courtyard.
Posted by Paula Lemire at 10:28 AM 2 comments: 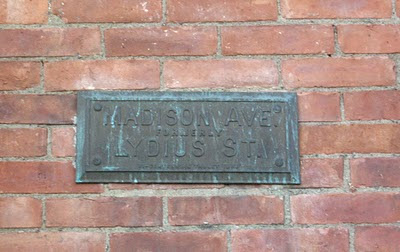 I already knew that my street was originally called Lydius Street. In fact, one of the older deeds for my house actually gives the location as Lydius Street. But it was still great to find the old Bicentennial plaque high on the wall of a former bank.
Posted by Paula Lemire at 9:18 AM 1 comment: 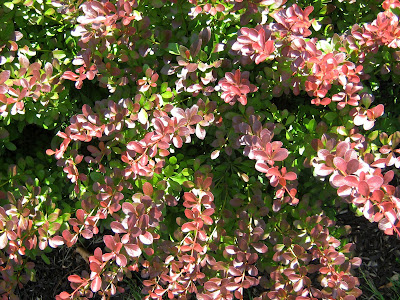 There's little to tell about this bit of shrubbery, except that it's part of a border around a rather monolithic pink granite sign on the east side of the New York State Capitol. And that I love the color, the mix of deep rose and fresh spring green.
Posted by Paula Lemire at 9:06 AM No comments: 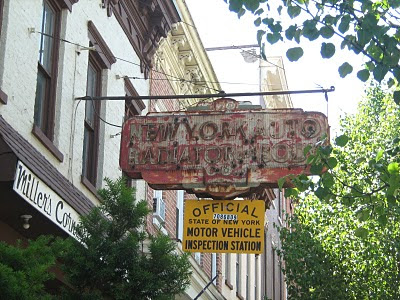 I'll have to count this sign as yet another detail of my neighborhood that I never noticed before. I've passed it so many times while walking down lower Madison Avenue near the Cathedral of the Immaculate Conception and the former "Little Italy" area of Albany.

When I was very young, we even got our old car's heater fixed here at least once or twice (and I still miss that 66 Caprice, heater problems aside). And the business is still open, though under a different name.

But the wonderful vintage sign - now very faded and corroded almost to the point of illegibility - never caught my eye before.
Posted by Paula Lemire at 9:56 AM No comments: 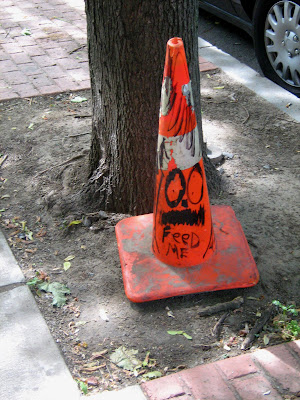 I don't know if this orange cone was left behind by workers or somehow "acquired" from a site up the block, but someone took a Sharpie to it and turned it into a comic character with an appetite.
Posted by Paula Lemire at 9:55 AM 1 comment: