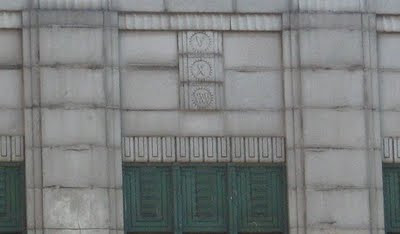 If you're on North Pearl Street, look up at No. 15. Way up, above the modern Rite-Aid sign and just below the roof, you'll see gray terra cotta medallions with the Roman numerals V, X, and VV5. They give a hint to the building's original use. It was built in 1937 to house a S.S. Kresge store where, rather like Woolworth's famous "five and dime," merchandise sold for a nickel, a dime, or a quarter. Let's just say the current occupant is a bit more expensive than that!
Posted by Paula Lemire at 5:48 PM No comments: 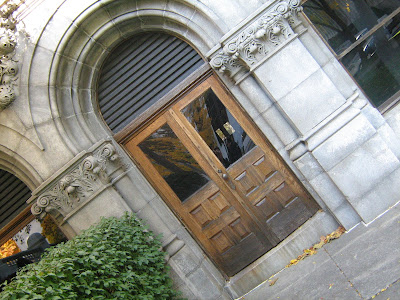 Tucked on the side of the massive flight of steps on the east side of the New York State Capitol is a pair of wooden doors. If you peer through them, you'll see a dim, dusty space piled with vague bulky shapes that appear to be old lamposts and other indistinguishable architectural bits and pieces. And, beyond them, a patch of light from an identical pair of doors on the far side of the stairs.

It's called The Goblin Passage and was apparently meant to allow an easy short-cut from one side of the Capitol stairs to the other. It's obviously been unused - aside from its current storage purposes - for years.

While I grew up close to the Capitol and had toured it many times, the Goblin Passage was something I didn't notice until I saw an exhibit of black & white photos highlighting the building's richly-detailed architecture. I have to admit that I saw this exhibit shortly after seeing Labyrinth and, well, I was quite thrilled to learned our Capitol had its own Goblin Passage.
Posted by Paula Lemire at 9:37 AM No comments: 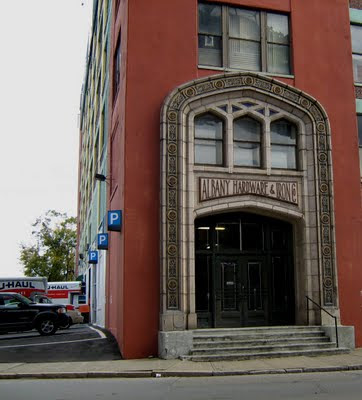 Certainly most people who live in Albany - along with a good many people who just pass through on 787 - are familiar with the U-Haul Self-Storage Building at 139 Broadway. It's hard to miss a building with a full-sized moving truck slowly rotating on the roof!

But probably far fewer people see the ornate evidence of the building's previous incarnation. If one ventures down to this otherwise gloomy-looking southern stretch of Broadway, one finds this beautifully ornamented entrance on the building's western facade, a side that would have once faced a very busy thoroughfare.

The original sign above the door announces that this was once the Albany Hardware & Iron Company, a business that actually had its origins in the 18th century and supplied items ranging from axe heads and bird cages to scales and food choppers to firearms.
Posted by Paula Lemire at 10:42 AM No comments: 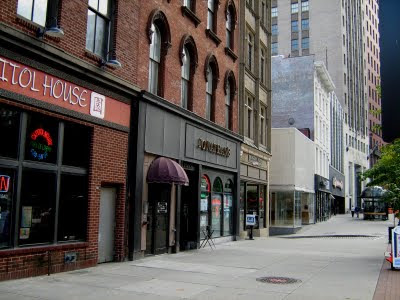 And it's still crowded with downtown office workers at lunch time.
Posted by Paula Lemire at 11:16 AM 1 comment: 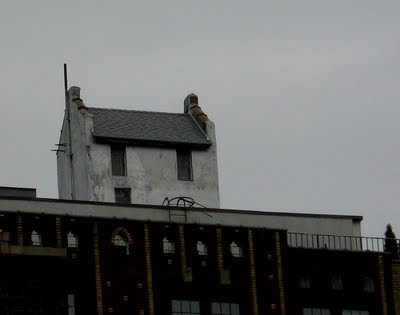 Not quite. It's actually the housing for the apartment buildings elevator equipment. Rather mundane after all. But it was deliberated designed to look like a colonial Dutch dwelling when the hundred-unit apartment building was constructed in the 1925 as an annex to the rear of 397 State Street, a striking 1880s brownstone by City Hall's architect H.H. Richardson.
Posted by Paula Lemire at 9:36 AM 2 comments: 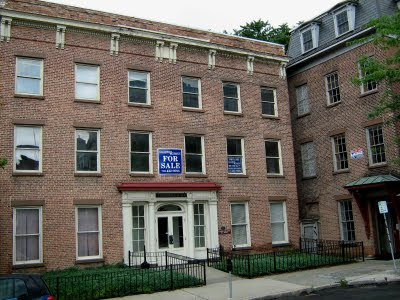 Erastus Dow Palmer is my favorite artist and no doubt a subject I'll be posting more about in the future. The gallery of his sculptures is, for me, the highlight of the collections at the Albany Institute of History & Art (not that I don't love the mummies there, too) and more than worth the price of admission.

My first exposure to his work came over twenty years ago on a trip to the Albany Rural Cemetery. I remember hearing some passing reference to an especially fine angel statue there, but I wasn't really looking for it and I didn't expect to be that impressed by one angel in a cemetery full of fascinating monuments. And I didn't actually know where this angel was located within the cemetery. But my late great-aunt (who somehow put up with my interest in history and let me drag her from Tarrytown to Ticonderoga and all sorts of places in between) was looking for the Corning family plot because she used to work for the late Mayor Corning's brother.

And, just across from the Corning plot, there was this angel. A white marble figure in the center of its own circular plot. It was Erastus Palmer's Angel At The Sepulchre. Even though the stone was eroded and covered with some sort of lichen from well over a century of exposure to the elements, it was still a very beautiful and moving work of art and it began my ongoing interest in the sculptor.

I knew his second Albany house was long gone, but I'd read that his first house and studio still stood on Columbia Street. However, I made several trips up and down that steep downtown street and found nothing that matched the description of Palmer's residence.

Then I realized what I'd read was wrong. It wasn't Columbia Street, but Columbia Place. And I knew just where that was. More than once, I'd noticed an old house tucked in a corner behind the foot of Elk Street. But I'd never really gone over and looked at it.

Sure enough, it was Palmer's house. Locating it at last was rather like finding a Holy Grail of area history for me. OK, the fact that I found two dollar bills on the curb nearby was nice, too.

Click here to read more about Palmer.
Posted by Paula Lemire at 9:54 AM 2 comments: 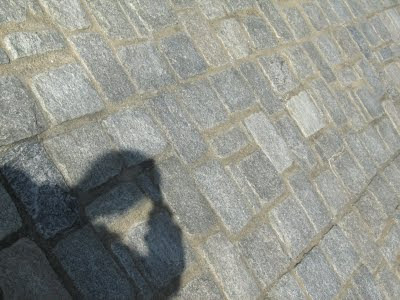 For some reason, I'm very fond of stone. Stone houses always catch my eye, whether they're simple early American fieldstone farmhouses or ornate Gothic mansions like Lyndhurst in the Hudson Valley.

And I like walking on stone...whether it's the old strip of flagstones that passes for a path in my backyard or the mellow cracked white marble sidewalk running through parts of Manchester, Vermont (the latter always reminds me of giant Ivory Soap flakes). Mind you, I'm the sort who wears hiking shoes every day so I don't have to worry about catching my fashionable high heels on rough paving blocks and twisting an ankle.

These stones are part of the main platform of the Empire State Plaza. They surround a black granite marker near the Plaza's north side, not far from the black and white cobblestone arrangement I've previously posted about (see Waves of stone)
Posted by Paula Lemire at 9:45 AM No comments: 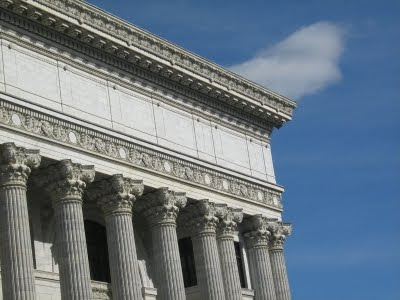 Located across Washington Avenue (but by no means overshadowed by) from the ornate bulk of the New York State Capitol, the old State Education Building is one of Albany's most recognizable buildings. It's impossible to miss that stately row of massive marble columns. In fact, it is said to be one of the longest load-bearing colonnades in the world.

I grew up hearing about the old State Museum which was housed in this building until the 1970s when it relocated to the Empire State Plaza on the far side of the Capitol. Mostly, I heard about the Iroquois diorama and the Cohoes Mastodon. The Mastodon's skeleton is now on display near the newer (and much more accurate) Native American diorama at the modern State Museum and the stuffed effigy is (when last I looked) located in the lovely old Cohoes Library. (Click here for some more details on the Mastodon...and some photos of its former home in the State Education Building).

I've only been inside this building a few times when I was quite young. It was well after the Museum moved, but I remember seeing some links from The Great Chain which stretched across the Hudson River at West Point to prevent passage of British ships during the Revolutionary War and what appeared to be a replica of the Liberty Bell.

I recently read some accounts of a ghost which haunts the sub-basement of the State Education Building. Supposedly, a laborer working on the foundations of the building vanished one day. His personal effects were found and it was assumed he'd fallen into the excavations, but his body was never recovered. It's said that this man's ghost makes his presence known in the building's lowest levels. I don't know if there's any truth to the tale, but it certainly corresponds to family stories I'd heard about a worker or two falling into and being entombed in the concrete as the building was constructed.

The State Education Building was constructed by the Rochester firm of R.T. Ford between 1908 and 1912. It was designed by the Paris-trained architect Henry Hornbostel.
Posted by Paula Lemire at 11:49 AM No comments: 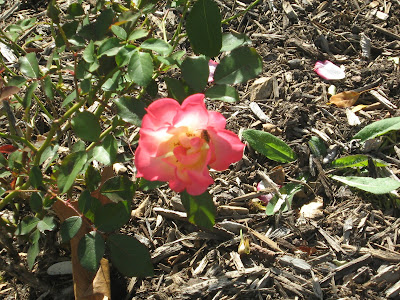 This is probably one of the last roses I'll see this year (not counting the cut ones in florist shops). Autumn has arrived, the weather is quickly turning cold and gloomy. But a few roses are still in bloom in the little park on the east side of the Capitol and the bee in the photo above is obviously making the most of the final few roses of the season.
Posted by Paula Lemire at 11:39 AM No comments: