A Bench For Souls 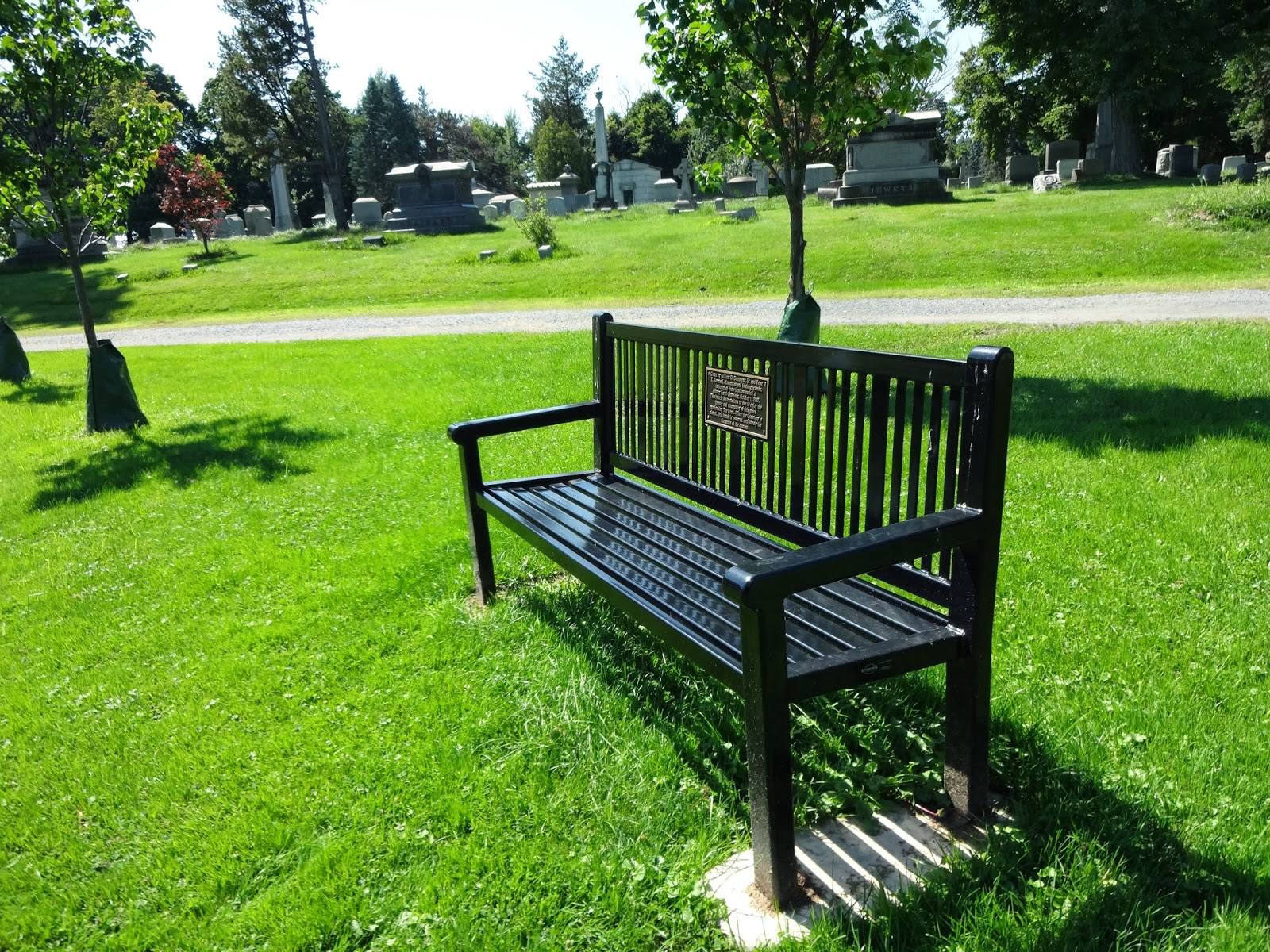 The Pond at the Albany Rural Cemetery (also known as Cypress Waters) is surrounded by benches which give visitors a nice place to relax.  The benches were made possible by donations and there are plaques affixed to each.  This one is particularly interesting.


Given by William D. Dearstyne, Jr. and Peter R Kermani, classmates and lifelong friends, in honor of their families buried at Albany Rural Cemetery, October 1, 2007. This bench is for visitors to use to enjoy the beauty and tranquility of this place overlooking The Pond. When the Cemetery is closed, this bench is reserved exclusively for the souls of the donors.

(Why not follow along as I digitally explore the Rural Cemetery at my other blog?)
Posted by Paula Lemire at 10:47 AM 1 comment: 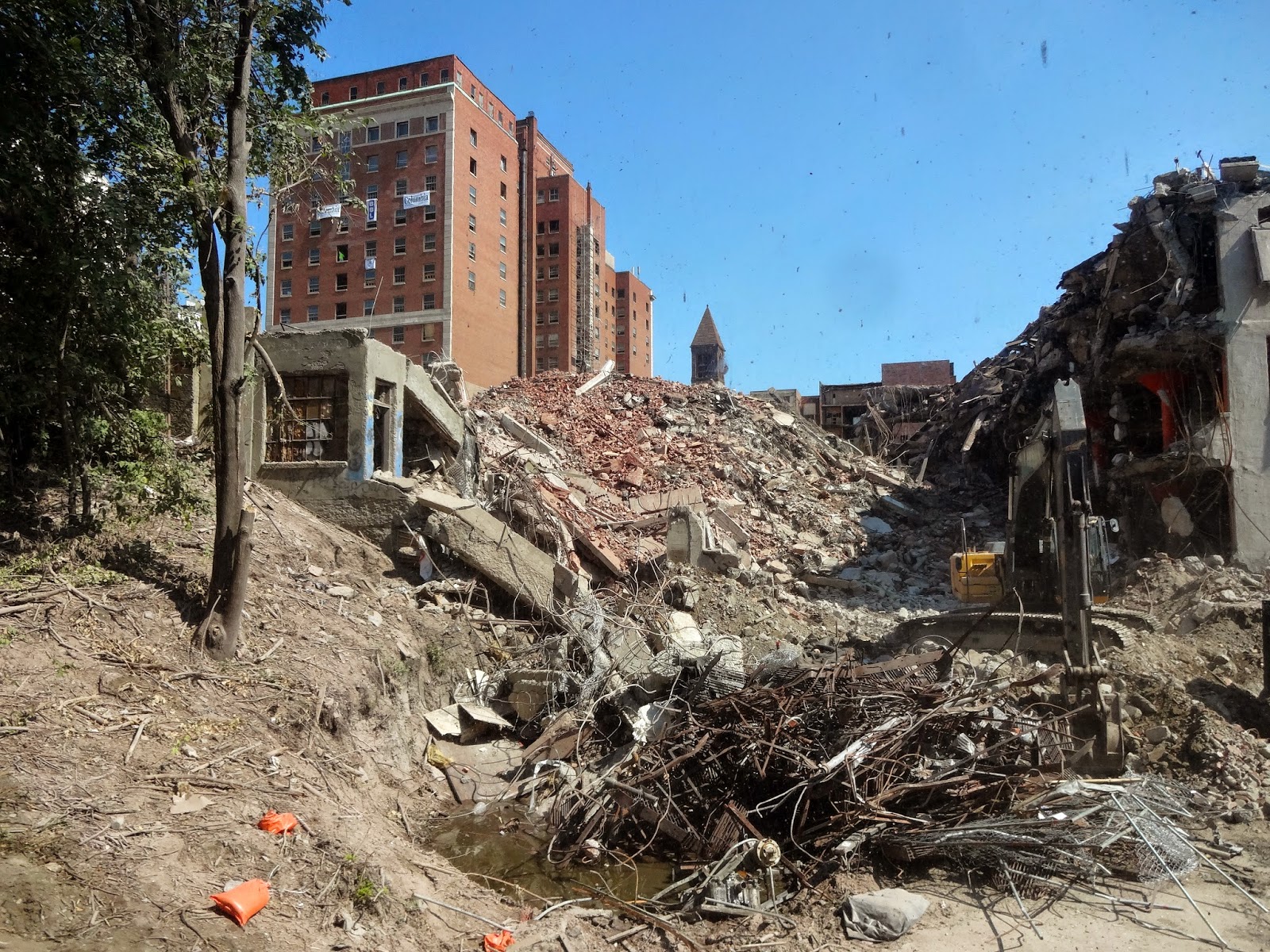 The rubble left behind after the demolition of the Wellington Hotel Annex on Saturday.  The partially collapsed structure on the right is the old parking garage from the Wellington complex In the background, the bell tower of City Hall and, to the left, the DeWitt Clinton Hotel which is being renovated. 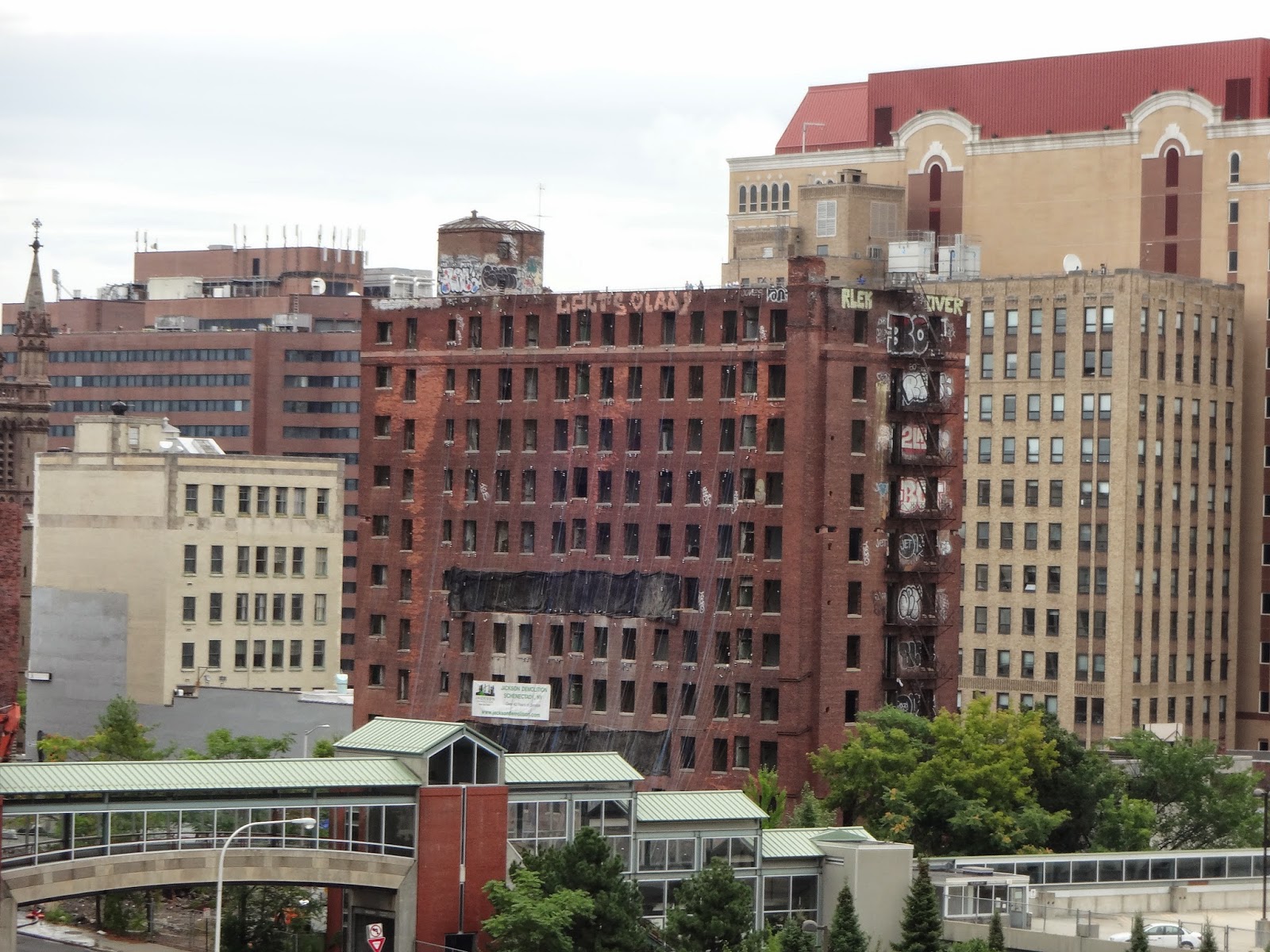 The final moments of the old Wellington Hotel's Annex on Howard Street.  This was the view of the Annex from the main platform of the Empire State Plaza just minutes before a rather colorfully choreographed implosion reduced the long-vacant building to rubble behind a cloud of smoke. 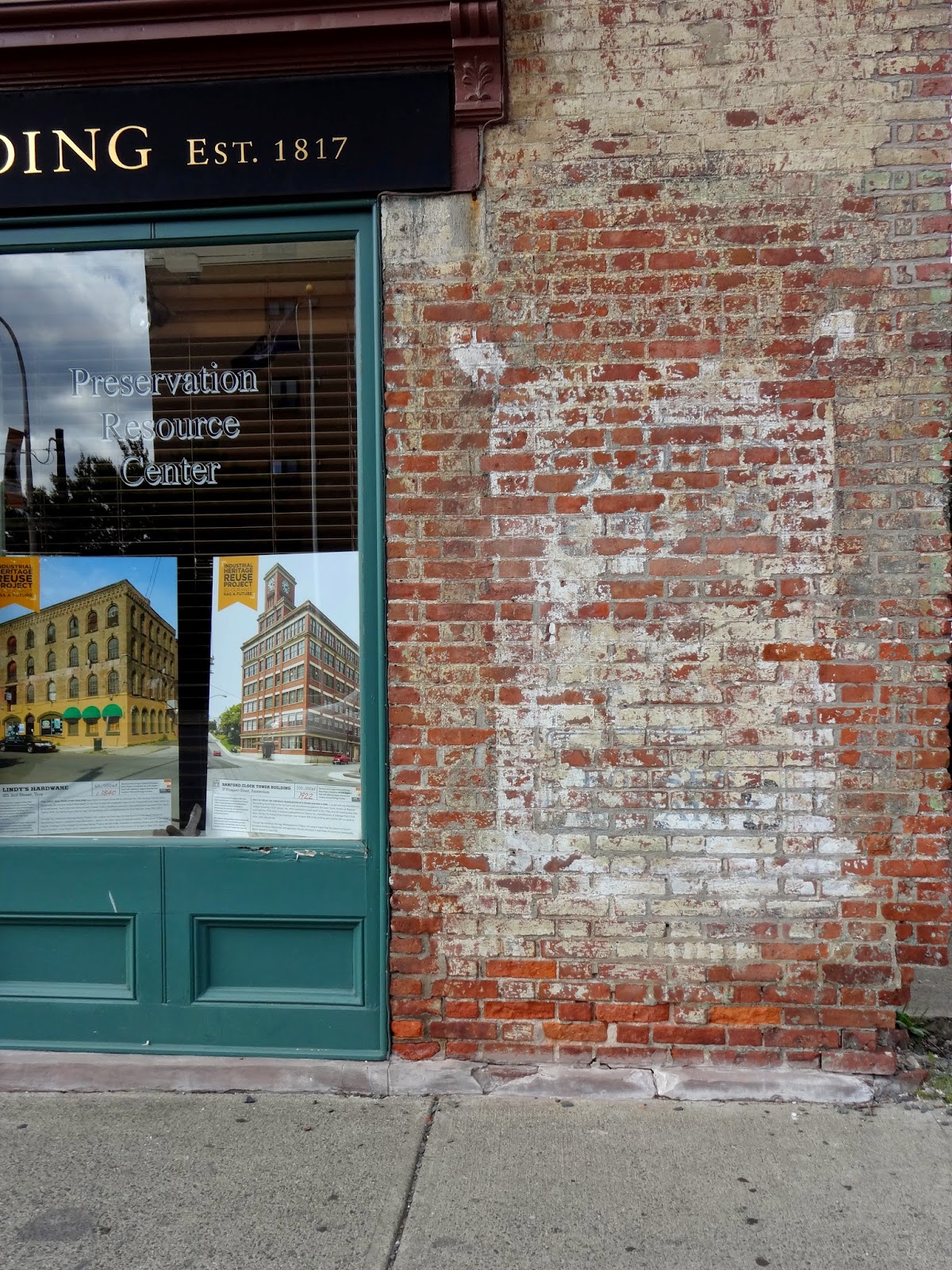 44 Central Avenue is one of two buildings which form "The Point" where Central and Washington Avenues meet.  A wonderful old commercial brick building an old hoist stick mounted on an upper floor, it is now home to the Preservation League of New York State.

I have walked past this building hundreds of times over the years - as a little girl going shopping at Woolworth's and, later, on the way to buy David Bowie albums at World Records or vintage clothing at Daybreak.  In more recent years, I'd walk by on the way to Honest Weight.

But, while I had noticed the faded ghost signs which overlook the parking lot on the west side, I would never have noticed this ghost sign on the front if not for a discussion in the Facebook group, Albany...the way it was.  If you're from Albany, have an interest in its past (distant and recent), and you're on Facebook, consider joining them.

It's a flour sack - a nod to the building's past as a grain and feed store.  Man 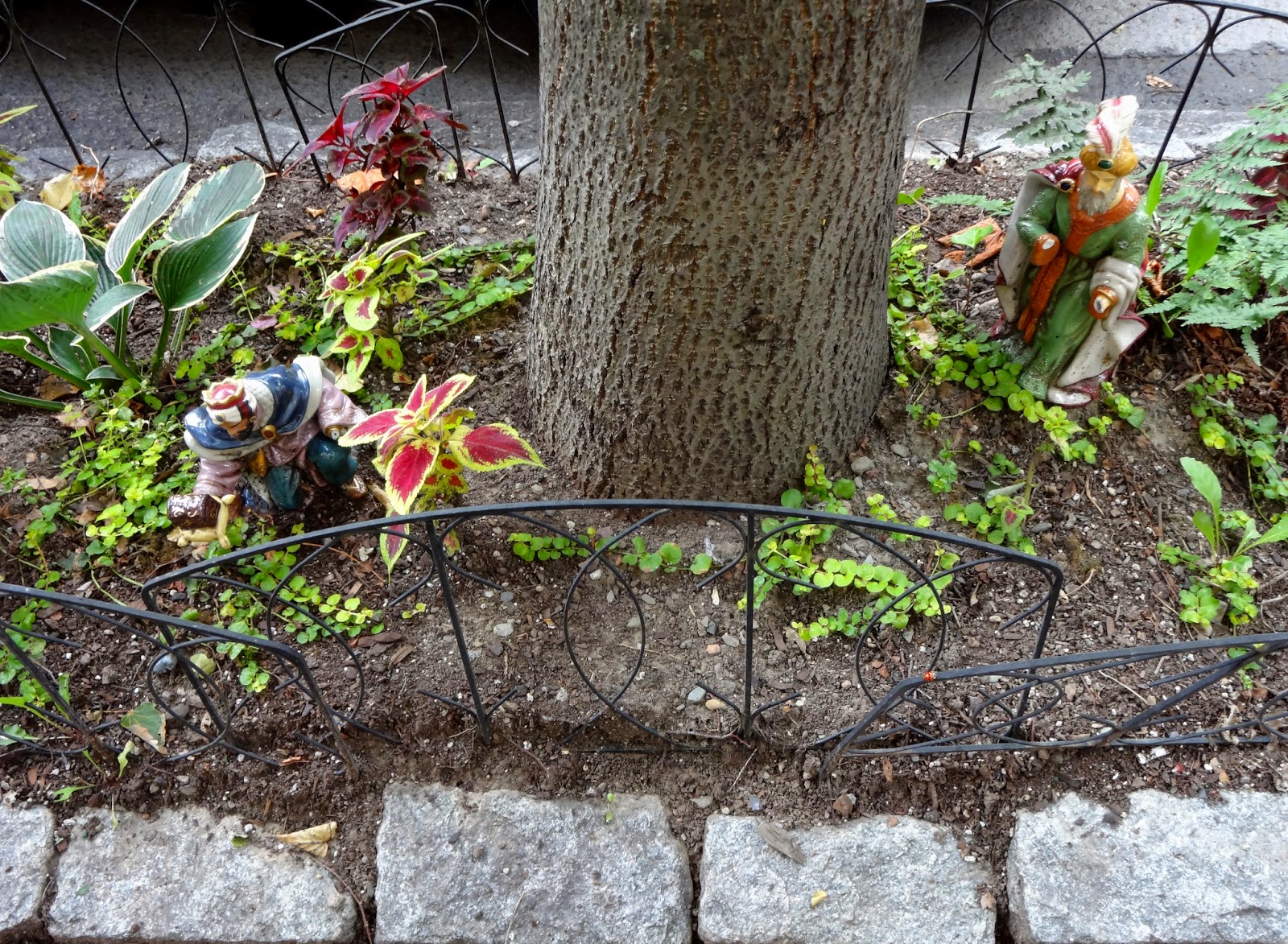 A pair of Wise Men seem to be looking for their missing hands beneath a tree just off Lark Street.
Posted by Paula Lemire at 7:30 AM 1 comment: 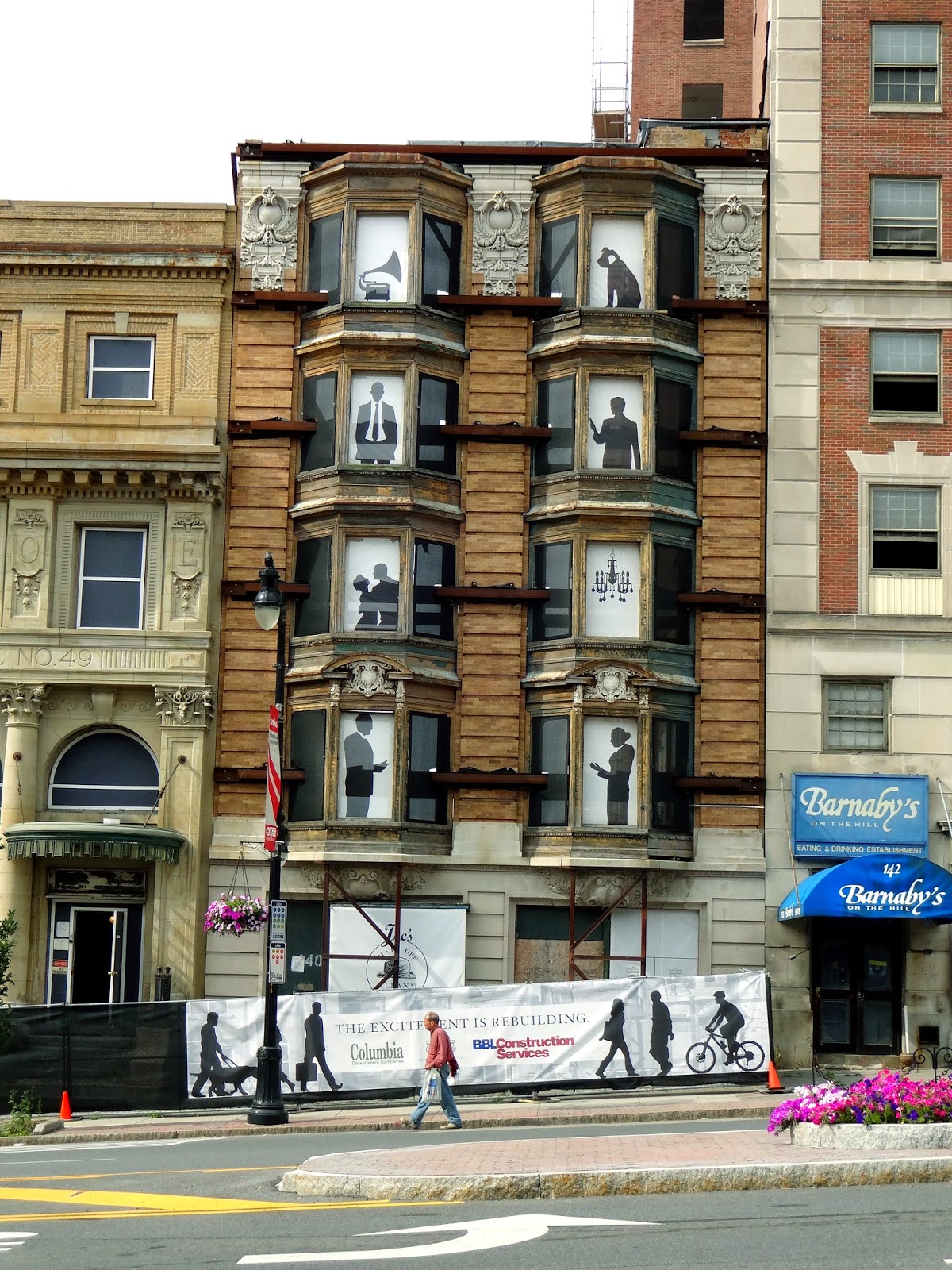 Silhouettes of people and objects fill in the windows of the former Berkshire Hotel.  Part of the long-neglected Wellington Row, it's now part of a project that will construct new buildings while saving the old facades.  The gramophone and dog are definitely an homage to Albany's iconic statue of Nipper on Broadway.
Posted by Paula Lemire at 7:30 AM 1 comment: 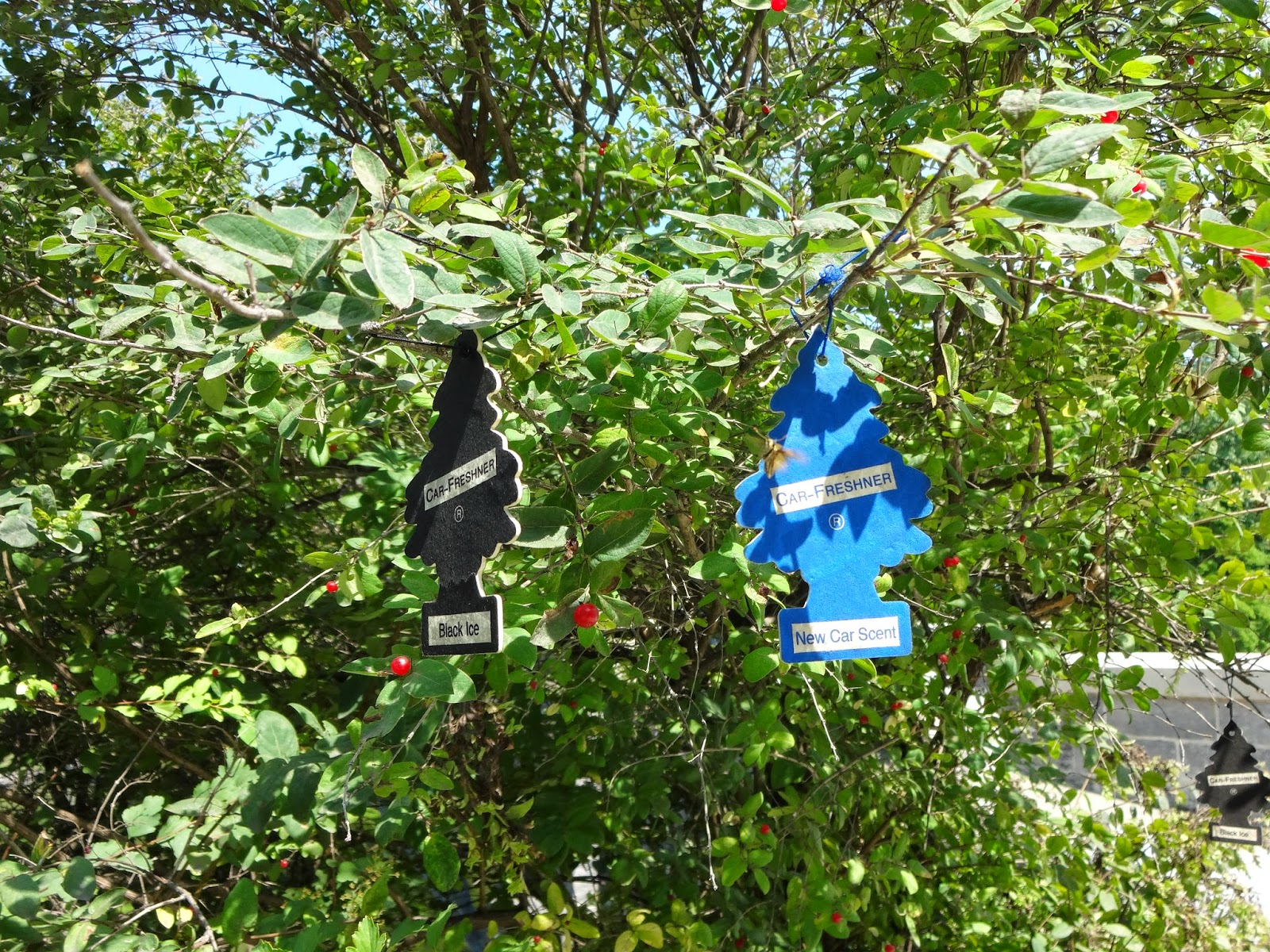 Maybe the fresh air wasn't quite fresh enough for the person who placed these car air fresheners on a shrub in Washington Park.
Posted by Paula Lemire at 6:52 PM 1 comment: 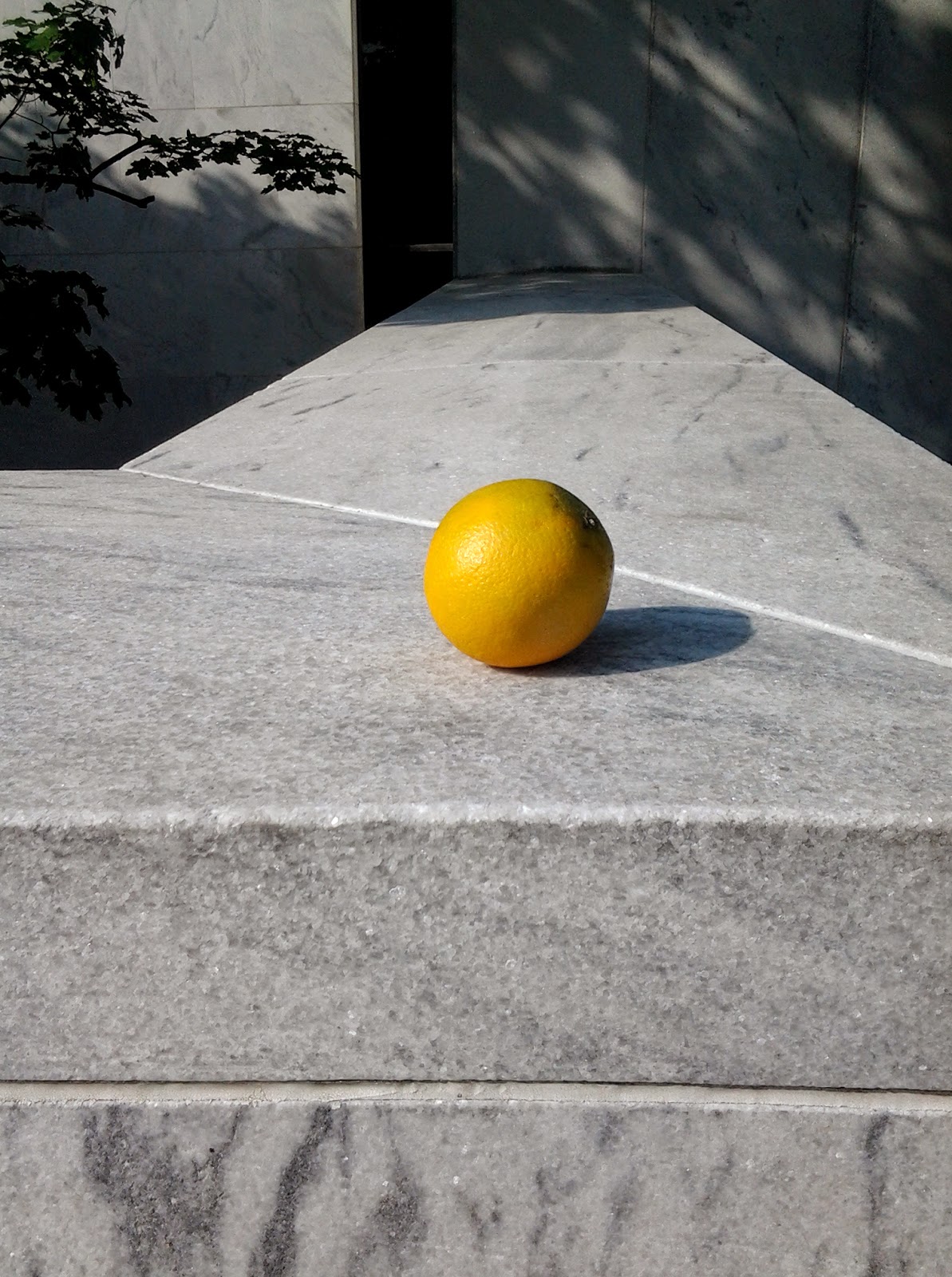 An orange sits on the marble wall outside the Justice Building at the Empire State Plaza.
Posted by Paula Lemire at 7:34 AM 3 comments: 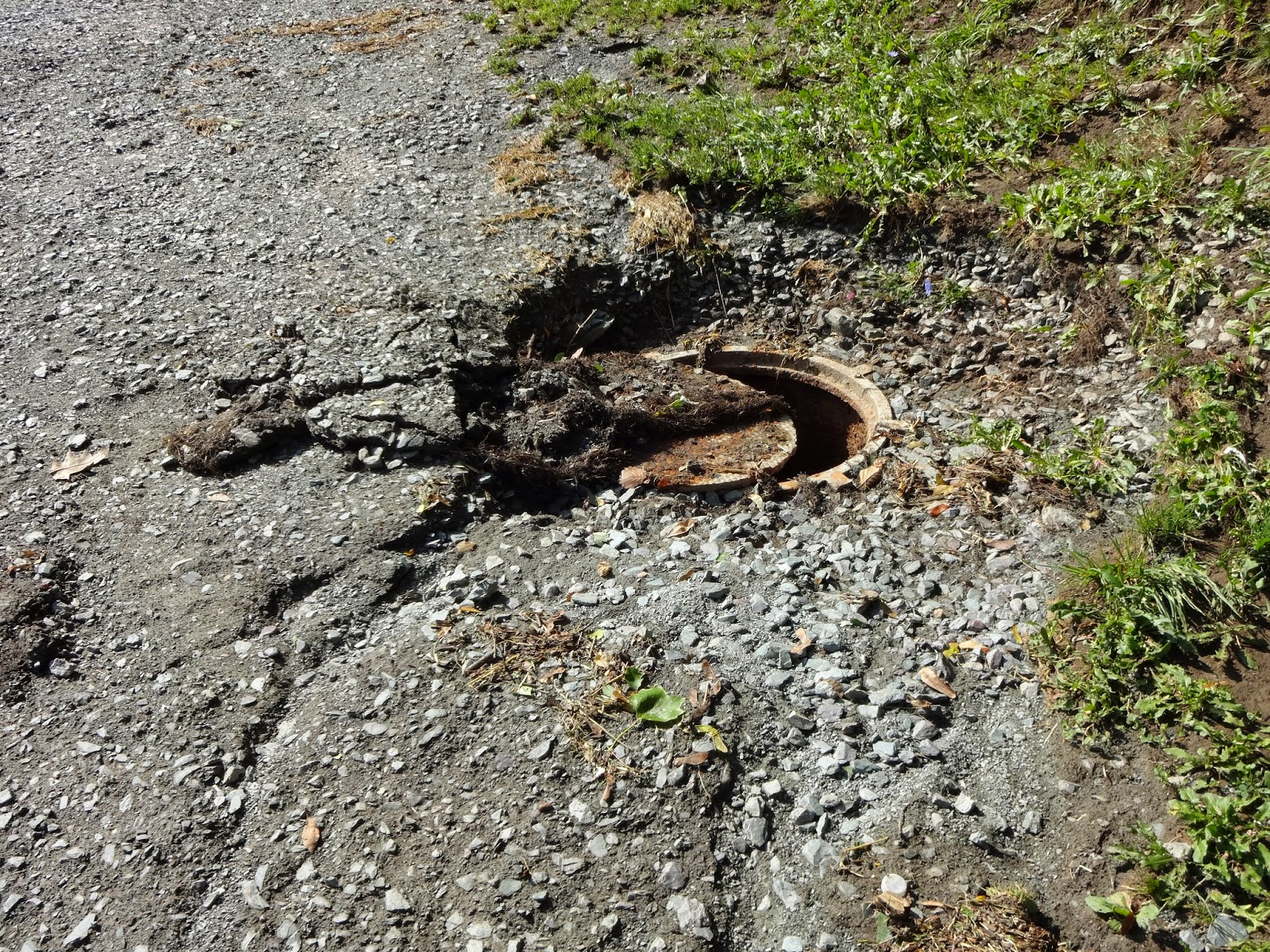 A manhole cover alongside the Washington Park lake lies open after the Tuesday storm that flooded intersections and left the lake path a mess.  I could hear the furious rush of water deep inside this culvert.
Posted by Paula Lemire at 7:33 AM 1 comment: 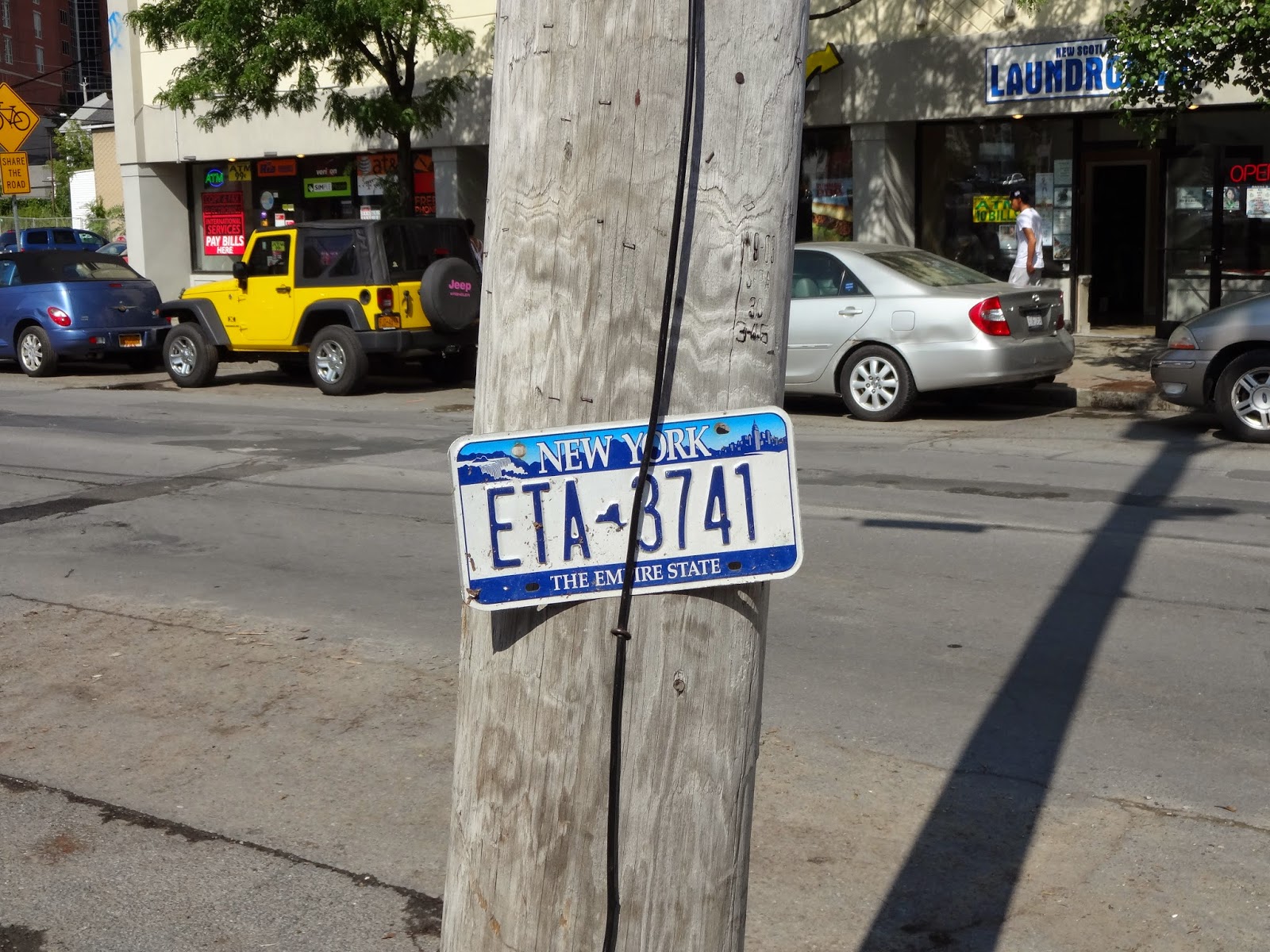 A license plate tucked on a utility pole on New Scotland Avenue near Myrtle.  I don't know how long it's been there, but perhaps it's a bit of flotsam from the bad storms which flooding the intersection last evening.