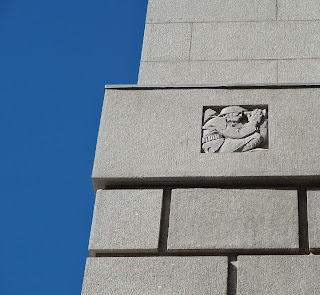 The Alfred E. Smith Building at Swan Street between Washington Avenue and State Street features a carved band with the names of every New York State county and figures engaged in various occupations from beekeeping to factory labor.  This figure in military clothing overlooks Washington Avenue and, in fact, seems to be keeping an intent look-out for today's Memorial Day Parade

Posted by Paula Lemire at 12:15 PM No comments: 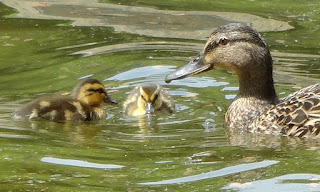 A female Mallard with two of her three ducklings at the Empire State Plaza
Posted by Paula Lemire at 7:21 PM No comments: 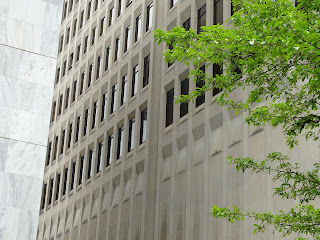 View of the Verizon offices as seen from the Vietnam Memorial Courtyard at the Empire State Plaza
Posted by Paula Lemire at 8:14 PM No comments: 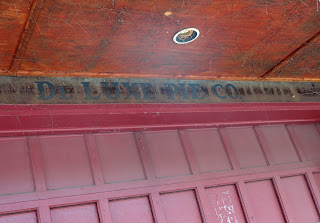 This sign in Garden Alley is all that's left of the old De Luxe Pie Company.  Garden Alley is a cul-de-sac of carriage houses directly behind Madison Avenue where the bakery was located during the mid 1900s.
Posted by Paula Lemire at 7:44 AM No comments: 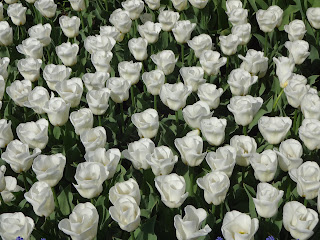 The tulips in Washington Park are a bit past their prime now and they'll be dug up for the bulbs in a day or so.  But here's a last look at one of my favorites from this season, a frothy white variety called Calgary.
Posted by Paula Lemire at 9:41 AM No comments: 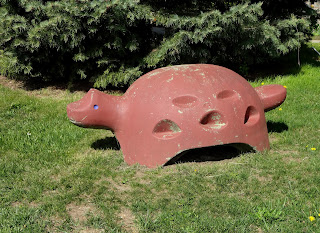 When I was very little, two of these large concrete turtles stood on Madison Avenue near the long wall that runs in front of the Price Chopper supermarket.  I remember playing on them after visits to the nearby Pine Hills library or before shopping.  The pair have since been moved across Madison on the lawn of the Steamer Ten Theatre.
Posted by Paula Lemire at 8:07 AM No comments: 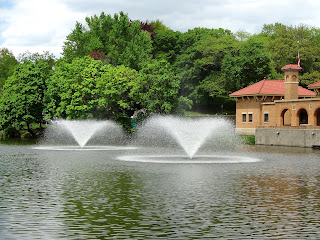 These twin fountains appeared rather suddenly in Washington Park Lake some time during the past week or.  I walk through the park at least four or five times a week; one day there were no fountains and, the next day, there they were.
Posted by Paula Lemire at 7:58 AM 1 comment: 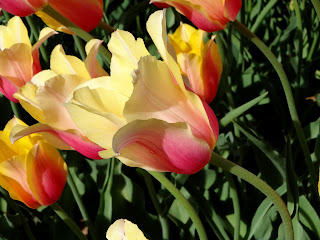 The annual Tulip Festival will be held in Washington Park this year and the flowers are in full bloom for it.  The tulips are some of the prettiest I've seen and absolutely worth checking out (though tomorrow's weather might not be as great as today's and yesterday's).  This beautiful bloom reminds me of fresh lemonade.
Posted by Paula Lemire at 9:06 AM No comments: 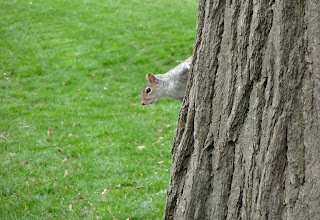 A squirrel peers from a tree in Washington Park.
Posted by Paula Lemire at 3:29 PM No comments: 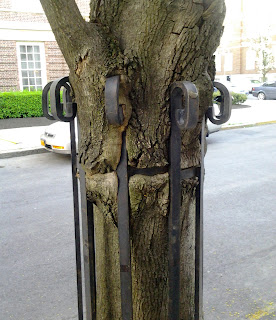 When I was very little, the city planted maple trees along my street and a number of others in the Center Square area.  The trees were surrounded by little iron fences like this.  As the trees grew, the fences were removed.  But they must have missed this one near the corner of Dove and Spring Streets.  As the trunk has expanded, the iron has become embedded in the bark.
Posted by Paula Lemire at 7:00 AM No comments: 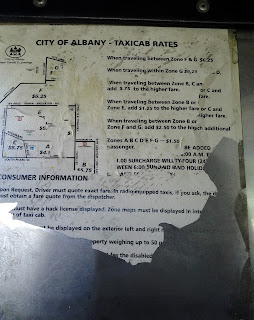 I won't burden this blog with all the details.  The only way to describe this driver would require pretty much every "expletive deleted" known to the human race.  My Yelp review is here.  Oh, and I'm making a complaint to the appropriate city department.
Posted by Paula Lemire at 5:37 PM 3 comments: 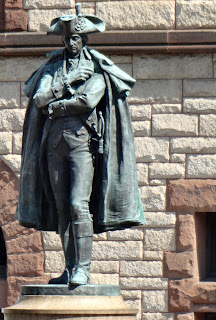 Last weekend, I saw a couple who appeared to be tourists.  They paused by this statue in front of City Hall and one of them said, "Huh, this must be George Washington."  I might have forgiven the mistake if they hadn't been looking right at the front of the pedestal which clearly identifies this as General Philip Schuyler. 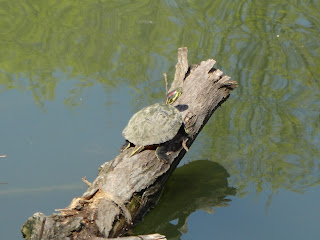 A small turtle enjoys a warm day in Washington Park. 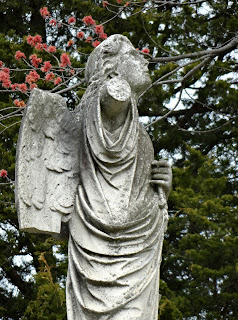 I've featured photos from Albany Rural Cemetery both here and at a dedicated blog.  Last week, though, I took a break from exploring there and visited Schenectady's historic Vale Cemetery.  The angel above, with its broken wings and and missing arm, is one of the many beautiful monuments there.

A photo essay from that trip is featured at my new site.

gardenalley.net - Visiting Vale
Posted by Paula Lemire at 9:21 AM No comments: