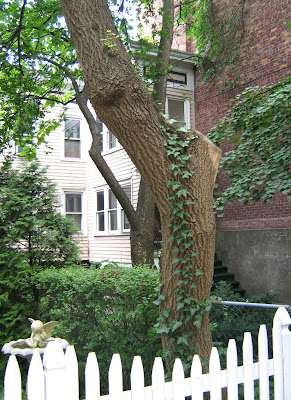 English ivy winds its way up a tree as a little angel perches on a birdbath in this small shaded garden near the Empire State Plaza
Posted by Paula Lemire at 8:32 AM No comments:

Anyone who knows me knows how much I love coffee. So, needless to say, I quite like this vintage sign on one of the drab, cube-like office buildings along Washington Avenue west of the Capitol.
Posted by Paula Lemire at 10:32 AM 1 comment: 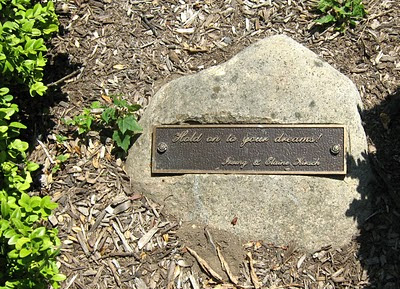 I've always been very fond of the lovely fountain in Academy Park near Eagle Street. It's elegant and refreshing (and not aging too well, but that's a story for another post). I even posed for a photo there before my senior prom.

For some reason, I vaguely associated it with Albany's Tricentennial celebrations in 1986, but a recent search through the Times Union archives shows that it was erected in 1988. Well, no one's memory is completely perfect (though I do have some pretty vivid recollections from both years)

But, as often as I've admired the fountain, I never noticed this tiny plaque - a little smaller than a bumper sticker - affixed to a rock in the low shrubbery enclosing the fountain. I found it two days ago on my way to Lodge's and wondered just what it was doing there. The name Irving Kirsch was familiar...I knew he was a local attorney and philanthropist who passed away in 1999...but the little plaque didn't give a hint to why it was there.

Another search through the archives reveals that, in 1989, Mr. Kirsch donated $15,000 to help cover the expense of installing the fountain.

Oh, and for what it's worth, I completely agree with the sentiment on the plaque.
Posted by Paula Lemire at 9:43 AM No comments: 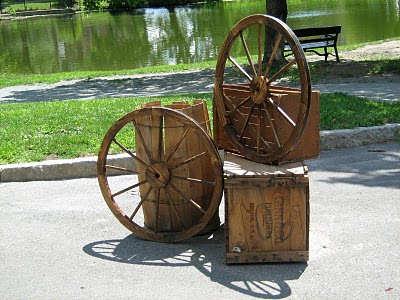 These wagon wheels and the wooden barrel and old-fashioned packing crates they rest against are decorations for this year's Park Playhouse production of Annie Get Your Gun! The paths around the Washington Park lake house is currently lined with booths and trimmings like the wagon wheels and crates above to give the area the look and feel of an Old West traveling show.

In case I haven't mentioned it before, I absolutely love musical theatre in general. Annie Get Your Gun! isn't my favorite show, but I do like the song "Anything You Can Do, I Can Do Better."

I haven't seen this production yet, but I do plan on going...as soon as I pick up some bug spray. The only real downside to the shows in Washington Park is that the close proximity to the lake attracts a few mosquitoes.

For more information about Park Playhouse and their current production, please check out their site!

parkplayhouse.com
Posted by Paula Lemire at 11:50 AM No comments: 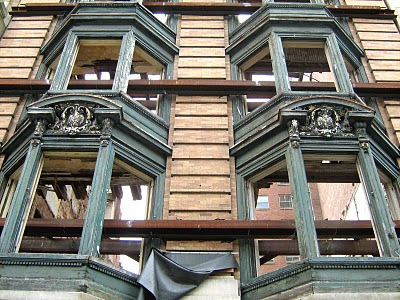 Massive horizontal metal beams stabilize this facade, part of State Street's long-decayed Wellington Row. Over the past couple of years, the Row's buildings have been torn down with only the facades (or, in the case of the Wellington Hotel, just the lower portion) preserved to be incorporated into future developments.

Previous posts about the decay and demolition of Wellington Row:

Shells
Down To The Bones
Almost Gone
Posted by Paula Lemire at 9:09 AM 1 comment:

The Writing Is (Not) On The Wall 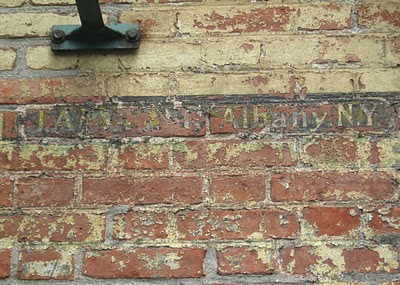 Albany is dotted with ghost signs, the fading relics of old ads painted on the walls. Previously, I've posted about a Times Union sign on Pearl Street, a 7-Up sign along lower Madison Avenue, and an electrical goods dealer on Liberty Street.

And All Over Albany had a feature on local ghost signs earlier this year.

This is a tiny one on a 19th-century brick building where Central and Washington Avenues converge in a point. The building has several very faint ghost signs on its western wall...what appear to be ads for Pilsbury products and an "Albany Diner" (not to be confused with the current Miss Albany Diner on Broadway). This one, on the south wall, is barely legible and one that escaped my notice until this weekend. Maybe the light was just right or I was looking from just the right angle, but the words Albany, N.Y. seemed to just leap out at me and, thankfully, I'd just put new batteries in my camera.
Posted by Paula Lemire at 9:24 AM No comments: 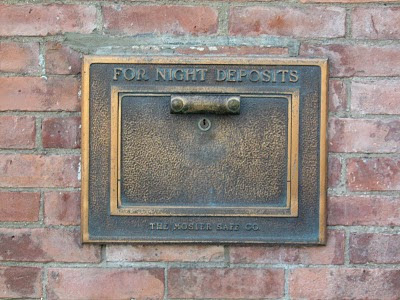 This box for after-hours bank deposits is mounted in the wall of an old bank building at the southwest corner of Madison Avenue and South Pearl Streets. The most recent business to occupy this site was a Key Bank, but it has been closed for several years and was often the target of hold-ups.

This drop-box was made by the Mosler Safe Company. Mosler was founded in Cincinnati in 1867 and, until closing in bankruptcy in 2001, manufactured a variety of safes and vaults for the banking industry. Its products were so durable that several exported Mosler vaults survived the atomic bombing of Hiroshima at the end of World War II. They also manufactured the vaults housing the originals of the Declaration of Independence and United States Constitution.
Posted by Paula Lemire at 10:16 AM 1 comment: 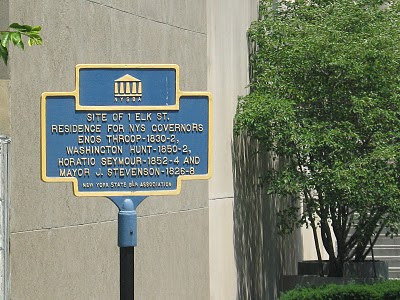 Before New York acquired the ornate Italianate building on Eagle Street in 1877 to serve as its Executive Mansion, the State's Governor's resided in private homes throughout Albany. One such place that housed four Governors between 1830 and 1854 stood at the corner of Elk and Eagle Streets. The house is long gone and the neighboring facades incorporated into the New York State Bar Association building, but a plaque marks the site at One Elk Street.
Posted by Paula Lemire at 11:20 AM 1 comment: 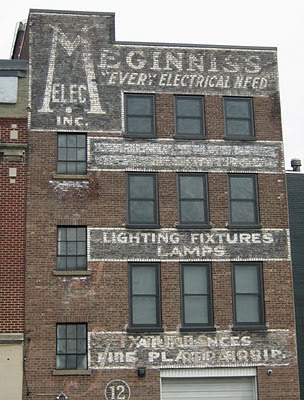 Overlooking Albany's oldest park and forming the rear of Broadway's Plaza Row, a number of the historic buildings along Liberty Street still bear the ghost signs of long-gone businesses such as this one, McGinnis Electric, Inc..
Posted by Paula Lemire at 9:00 AM No comments: 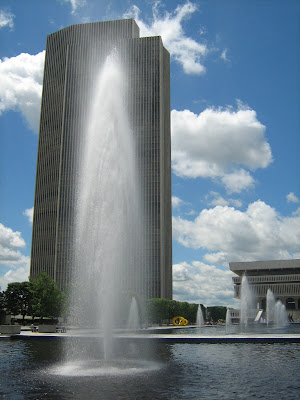 Fountains on the Empire State Plaza with the Corning Tower and State Education Building in the background.
Posted by Paula Lemire at 1:36 PM 1 comment: 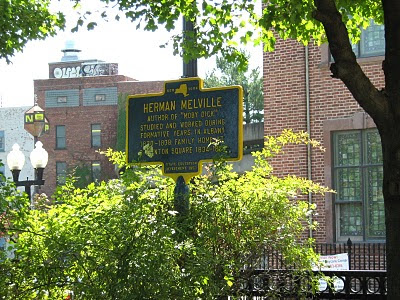 This plaque stands in Clinton Square, a tiny plaza on North Pearl Street just to the north of the Old Dutch Church and a short distance from two downtown theatres, Capitol Rep and the Palace. Nearby is the appropriately named cafe, Melville's Mug.
Posted by Paula Lemire at 7:49 AM 1 comment: 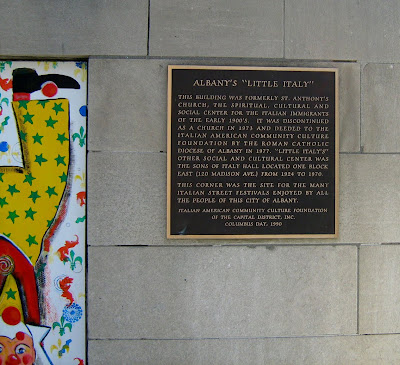 This plaque is mounted on the wall of the former St. Anthony's Roman Catholic Church at the corner of Madison Avenue and Grand Street. The church was once the center of Albany's Italian-American neighborhood. Closed for decades, the building is now home to Grand Street Community Arts. The painted clown at the left is part of their BoardedUp program.

Be sure to check them out on Facebook, too.
Posted by Paula Lemire at 10:10 AM No comments: 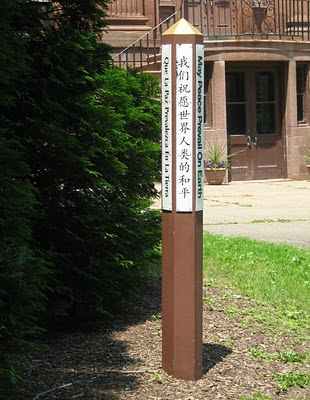 There are thousands of these markers, part of the Peace Pole Project, scattered around the world. Albany is home to several, including this one in Academy Park.
Posted by Paula Lemire at 9:26 AM No comments: 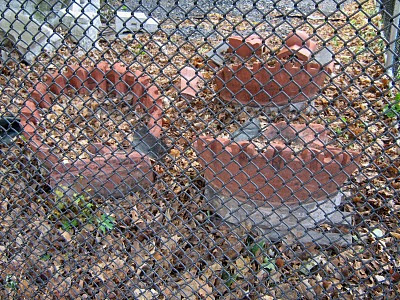 Decorative pieces of the New York State Capitol roof being stored behind a fence on the west side of Capitol Park during an ongoing restoration.

Also see Carved Stones
Posted by Paula Lemire at 9:34 AM No comments: 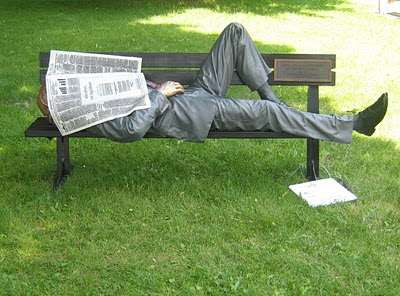 At first glance, this appears to be a nicely dressed man taking a nap in the shade of Academy Park. At second glance, though, you realize he's not real.

This sleepy gentleman is part of the 2010 Sculpture In The Streets exhibit, a series of statues by Seward Johnson that are scattered around Albany's downtown.

Up close, the statues are obviously just that...cast bronze figures. But, seen unexpectedly from the corner of one's eye, they can be startling.

Check out All Over Albany's recent post for more about the exhibit.
Posted by Paula Lemire at 9:08 AM 1 comment: 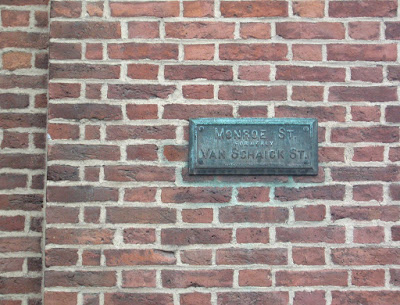 Bicentennial plaque on the south wall of the Old Dutch Church on Broadway. This part of the former Van Schaick Street is gone, now occupied by part of a memorial garden for cremated remains, but a short part of Monroe Street remains running north from Chapel Street behind the church.
Posted by Paula Lemire at 12:06 PM No comments: 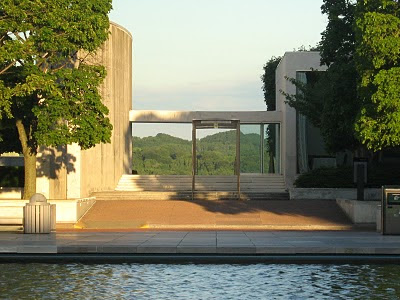 Looking east across the Empire State Plaza's central reflecting pool on a summer evening with the East Greenbush hills on the horizon across the Hudson River.
Posted by Paula Lemire at 3:18 PM No comments:

http://albanynyhistory.blogspot.com/
Posted by Paula Lemire at 11:44 AM No comments: 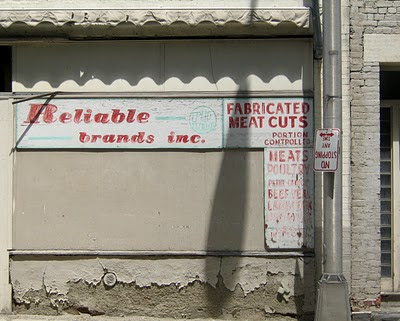 Closed meat supplier on Beaver Street, just a few doors from the old Bella Napolil.
Posted by Paula Lemire at 9:53 AM 1 comment: