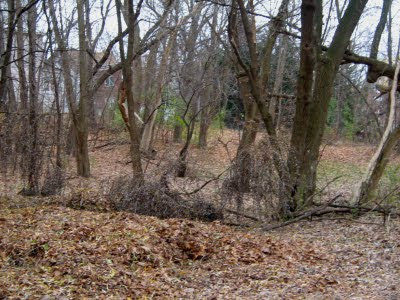 About a week ago, I was running an errand on Delaware Avenue (and resisting the urge to go explore the gully again). I paused to take a photo of the street sign on Providence Avenue...and that's when I made the connection. The wooded shortcut picture above was once part of the James' farm.
Posted by Paula Lemire at 11:13 AM No comments:

Down In The Hollow 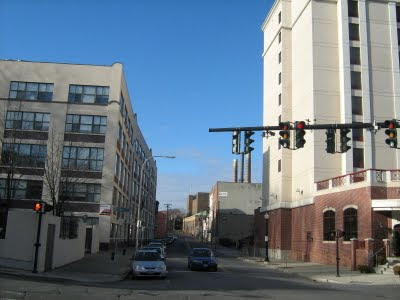 This is the view west along Sheridan Avenue just above North Pearl Street. This street was once the bed of a stream, the Fox Creek or Vozenkill. After the stream was moved underground (not unlike the Beaverkill across town), the area known as Sheridan Hollow was built over with small, shabby flats and the area became one of 19th-century Albany's slums.

The area became home to immigrant families, mostly new arrivals from Ireland. Unemployment in the Hollow was estimated at 20%. Despite a then-modern sewer created when the Vozenkill was buried, sanitation was poor and many of the houses relied on privies. Water- and sewage-borne diseases such as cholera were all too common afflictions. Overcrowding was so extreme that an 1850 census showed 84 people (from less than twenty families) living in only three two-story homes.

The area remains very shabby to this day. A hotel and upscale restaurant (Yono's at the right of this photo), a nice cafe (the Victory) do well enough at its eastern most end. But venture up the street - past the gloomy bulk of the old ANSWERS incinerating plant and a small assortment of industrial buildings and parking facilities for the State offices on the hill to the south - and there's very little to see. Just rows of abandoned wood-frame row houses with boarded windows and NO TRESPASSING signs. The area was rough enough around the edges when I was a child and my favorite great-uncle lived on Sheridan Ave. at South Swan. But it's gone down since then.
Posted by Paula Lemire at 9:54 AM 2 comments: 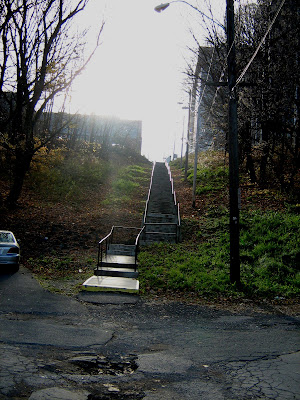 These steep stairs are one of three flights of stairs leading up - or down - to Sheridan Avenue. One flight runs down from Columbia Place near the house of Erastus Palmer. That one is now gated and overgrown with weeds at the top. The one above is the middle set and runs down from Swan Street. My great-uncle used to live at the foot of this set when I was small. The next flight is part of the parking lots below Elk Street.

When I was very young, these stairs were quiet derelict and scary. The steps were cracked, choked with weeds, and had a reputation for being dangerous. They've since been repaired and, while they're still slightly seedy at times, they're greatly improved.
Posted by Paula Lemire at 9:17 AM No comments: 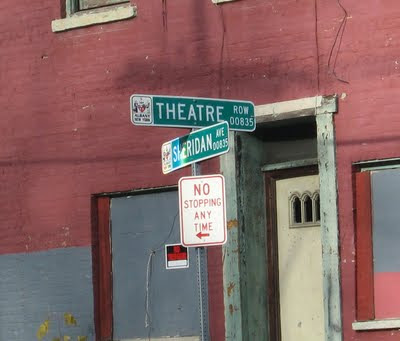 There's not a great deal to write about this particular photo. Aside from history, theatre (specifically Broadway musicals) is one of my biggest interests. So, when I saw this street sign on Sheridan Avenue, I just had to take a photo of it.

Also, since it is Thanksgiving, I want to just say a very sincere thank you to everyone who has been reading, following, and commenting on this blog.
Posted by Paula Lemire at 10:49 AM No comments: 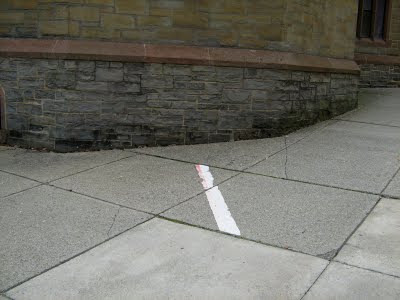 In 1986, during Albany's Tricentennial celebrations to mark 300 centuries since the signing of the Dongan Charter, a line in the colors of Albany's flag appeared on downtown streets. The line retraced the boundary of the stockade that enclosed Albany in 1686.

The heavy wooden fence ran from the Hudson River on the east and close to the current path of Maiden Lane on the north side and, on the south side, roughly parallel to modern Hudson Avenue near the parking garages and post office. Fort Albany marked the western end close to today's Crown Plaza Hotel at Lodge Street.

This artist's rendering gives a good view of how Albany would've looked at the time of the Charter.

Albany certainly has grown since the signing of the document which, in effect, created it as a city.

The commemorative lines on the sidewalk have all but worn away in the part twenty-three years. There's one piece on State Street a half block up from the Crown Plaza, near where Fort Albany (and, later, Fort Frederick) stood. The portion in the photo is at the rear of St. Peter's Episcopal Church just off Lodge Street.
Posted by Paula Lemire at 8:27 AM No comments: 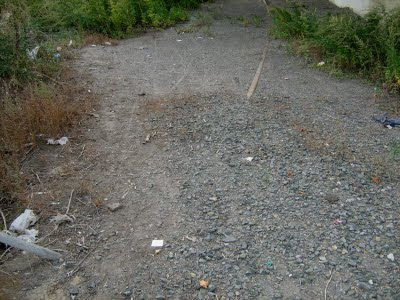 Trains were long a vital part of Albany's culture and economy. You could say that people here were, in a sense, "early adopters" since the country's first chartered railroad had its starting point near the junction of Madison and Western Avenues. Prominent families such as the Cornings amassed fortunes in the rail and related industries. Trains were a vital part of the West Albany stockyards, bringing in cattle from western states. Passengers trains departed from the handsome Union Station until the 1960s. Freight trains still haul goods in and out of the Port of Albany.

There are plenty of obvious reminders of the railroad heyday, both the commercial and the passenger lines. The Union Station is still a visible (though again vacant) part of Broadway, weathered old rail bridges can be seen here and there. On cloudy days, the sound of train whistles sometimes carries as far as my house near Lark Street.

This very short stretch of track goes nowhere...emerging from the gravel in a litter-strewn lot across from the old U-Haul Building on Broadway just north of the Port.
Posted by Paula Lemire at 10:51 AM 1 comment: 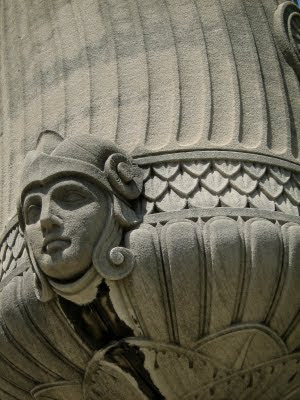 I haven't been able to update the blog for some days due to a computer problem. Good news, everything is fixed and posts will resume shortly. In the meantime, an ornamental face on one of the large urns flanking the steps at the western edge of Capitol Park, just opposite the Alfred E. Smith Building on Swan Street.
Posted by Paula Lemire at 8:08 AM 2 comments: 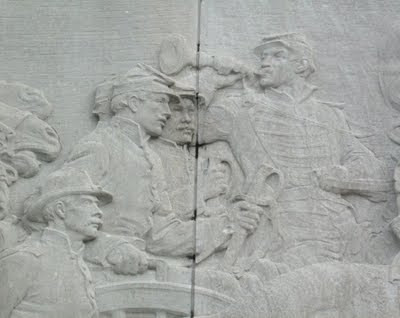 Most Albany residents are familiar with the monument at the Henry Johnson Boulevard (formerly Northern Boulevard, but renamed to honor a WWI hero) entrance to Washington Park.

The most common view of the monument is from the front - a bronze maiden holding a sheathed sword, her arms laden with palm branches. But that view doesn't show the handsome details of the marble base, such as the Union soldiers shown above.

While it's commonly called the Soldiers & Sailors Monument, its official name - according to a nearby plaque - is the Albany Veterans Memorial. Dedicated on October 12, 1912, it was rededicated in 1986 as part of Albany's Tricentennial celebrations.
Posted by Paula Lemire at 7:15 PM No comments: 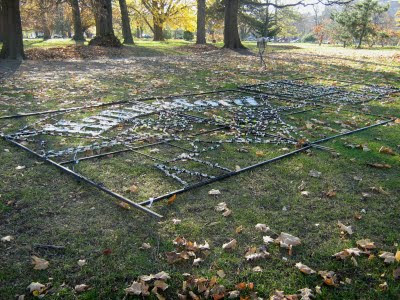 This past weekend was unseasonably warm and I took a walk in Washington Park to enjoy a sunny Sunday afternoon.

A crew was in the Park installing some some of the displays for the annual "Capital Holiday Lights." The annual winter event is a colorful drive-through exhibit of holiday-themed lights which benefits the Albany Police Athletic League.

I have to admit I've never actually driven through the Holiday Lights. Mainly because I don't drive and because I live so close to the Park that I see the whole display every time I go for a walk.

But it is quite pretty and I do highly recommend it, especially for kids.

http://www.albanycapitalholidaylights.com/
Posted by Paula Lemire at 9:08 AM No comments: 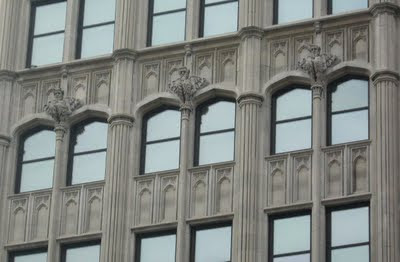 74 State is a particularly handsome building on lower State Street Hill between Green and North Pearl. It was built for offices in 1910 and originally known as the Kinney and Woodward Building. Recently renovated as a hotel, their site gives a good summary of the structure's history and some remarks by Albany author William Kennedy. Click here to read.
Posted by Paula Lemire at 9:34 AM 1 comment:

Lost In The Wilderness - Part Five 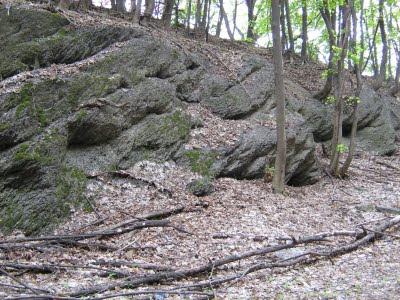 This is the fifth in a series of posts on the Beaver Kill Ravine.

Aside from the presence of the old brick and stone culvert giving a glimpse of a rushing river beneath the Lincoln Park gully, my other favorite feature of the Beaverkill ravine is the stone. The north and south walls of the gully are lined with heavy gray-black outcroppings of truly ancient bedrock.

According to a geology report in a 1930 bulletin from the New York State Museum, the stone is "Snake Hill shale" which it describes as a "dark, argillaceous, intricately folded and crumpled, as much as 3,000 feet deep."

According to the same 1930 report, there are very few places around Albany where this ancient bedrock lies exposed. I've seen similar stone along the Normskill near Delaware Avenue at the City's southern boundary. The other location given in the bulletin is a spot called Black Rock Cut, somewhere along the old NY Central Tracks near Tivoli Lake.

To be continued...
Posted by Paula Lemire at 9:37 AM No comments: 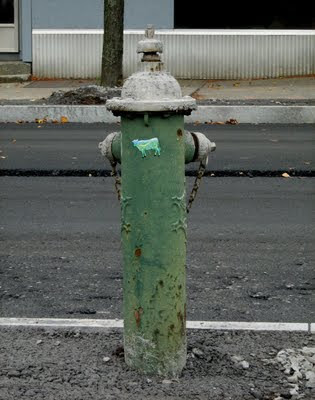 The Delaware Avenue section of Albany has been quite chaotic in recent months with a massive street reconstruction project tearing up the sidewalk and road. Walking it is a real chore, but driving it seems even worse. So, I'd rather avoid it for now. But, while running errands the other day, I took a break near St. James Church and Key Bank...and spotted this colorful cow sticker on a fire hydrant near the benches.
Posted by Paula Lemire at 10:01 AM 1 comment: