The Corner of Maiden and Pearl 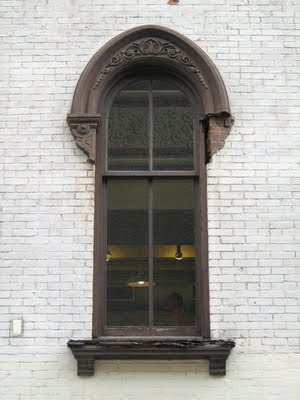 The building at the corner of North Pearl Street and Maiden Lane (which now houses a busy Bruegger's Bagels) has rows of these very elegant cast iron lintels, as does the adjacent building on North Pearl. From a distance, they give the appearance of brownstone elements.

This building can be spotted in scenes from the movie The Other Guys.
Posted by Paula Lemire at 9:04 AM 1 comment: 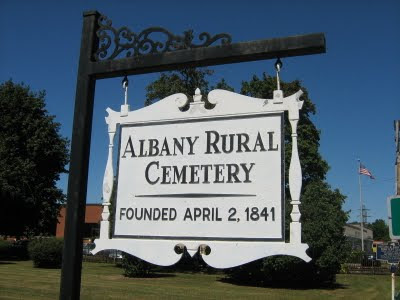 Sign outside the Albany Rural Cemetery along Broadway (Route 32) in Menands. Since my photos of the Rural Cemetery could easily take over this blog and Albany (NY) History, I've recently created a companion blog dedicated to one of my favorite places. Please take a look at the link below:

Thanks!
Posted by Paula Lemire at 8:54 AM No comments: 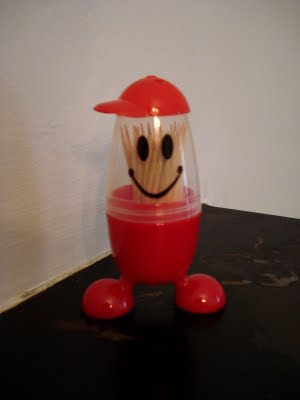 Isn't he cute? I don't buy much in dollar stores because I've had bad experiences with items that are just so cheaply made they aren't worth the dollar I paid for them. But last week I had need of some envelopes and a Central Avenue dollar store was the nearest place to get them...and that's how I found this little fellow and his brothers (they're yellow and blue, respectively). I was low on toothpicks anyway!
Posted by Paula Lemire at 4:52 PM 1 comment: 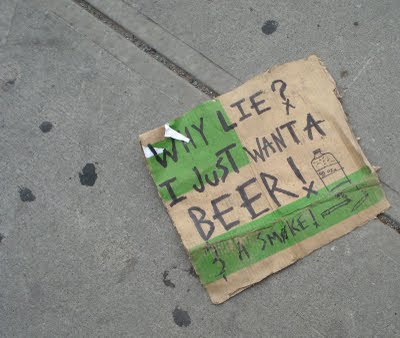 A panhandler's sign discarded near Lark Street.
Posted by Paula Lemire at 6:29 AM 2 comments: 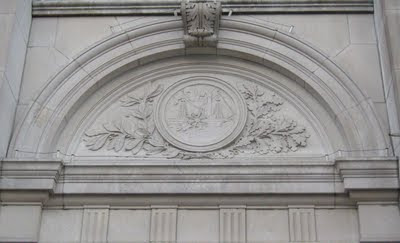 Above the side entrance to the beautiful old Albany Trust Building, there is a relief of the North River Steamboat.

Better known as Clermont (after the Robert Livingston estate where it made a stop on its maiden voyage), Robert Fulton's vessel was the first commercially successful steamboat and made its inaugural voyage up the Hudson River from New York City on August 17, 1807.

Steamboats would become a vital part of Albany in the coming years and, while they no longer travel the Hudson, they're not entirely forgotten. A McDonald's at the foot of Madison Avenue and Broadway stands near an area once called Steamboat Square and is shaped like a steamboat. A plaque at SUNY Plaza also commemorates the Clermont's first landing.

Located at the northwest corner of Broadway and State Street, the former Albany Trust Building is one of downtown's handsomest buildings. Designed by Marcus Reynolds and built in 1902, it features a rounded corner topped by a stunning eagle-crowned dome. The stone work on the ground floor - included the Clermont relief which overlooks Broadway - were part of later additions.
Posted by Paula Lemire at 9:10 AM No comments: 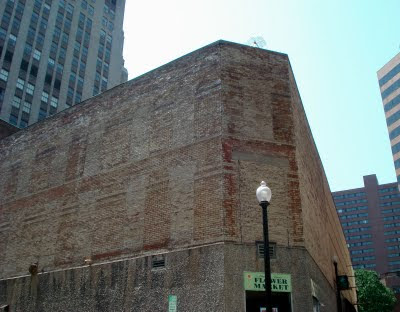 A building full of bricked-over "ghost" windows at the corner of Maiden Lane. The first floor of this building used to house a shoe repair shop, but has been vacant for some time.
Posted by Paula Lemire at 7:56 AM No comments: 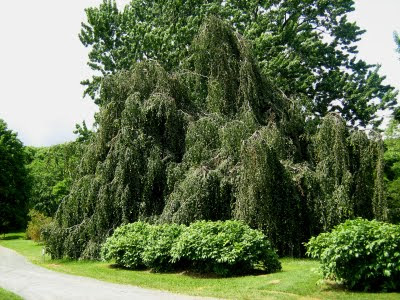 This weeping ash tree is believed to be one of the oldest trees is Washington Park (or, as its sign calls it, one of the park's "senior citizens"). Beneath the branches, the air is very cool, almost cave-like and one of its trunks is carefully supported by a wooden brace. The venerable ash is located just northwest of the Moses fountain.
Posted by Paula Lemire at 8:20 AM No comments: 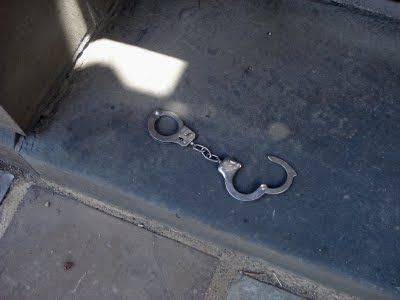 I found these on the steps of the apartment building next to my house yesterday morning. I guess someone had an interesting weekend.
Posted by Paula Lemire at 7:15 AM No comments: 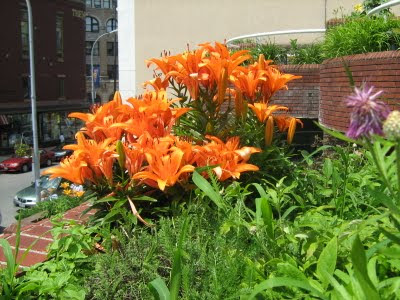 I don't get to Troy very often and that's definitely something I need to change. But this weekend, I ventured across the Hudson to attend RiverFest and it was absolutely worth it. It was one of the better street fairs I've been to in a long time (and one band - The Neanderthals - was hilarious) and it gave me a chance to admire some of the wonderful historic architecture in downtown Troy (I recognized quite a few places where The Age of Innocence was filmed, too). These lovely lilies were at the Atrium; the store in the background is the excellent Market Block Books.
Posted by Paula Lemire at 11:36 AM 1 comment: 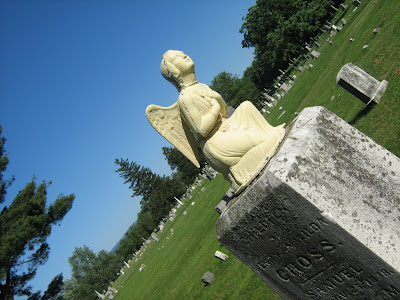 A petite angel atop a monument on the North Ridge of the Albany Rural Cemetery. She is missing one wing and no longer fastened to the stone, but someone must repaint her once in a while.
Posted by Paula Lemire at 6:58 AM 1 comment:

The Pot On Wheels 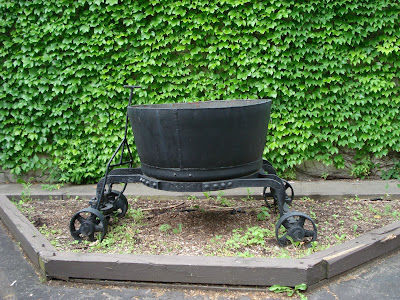 This one is just outside Albany in Watervliet, just north along the Hudson River. It's a large iron kettle mounted on wheels and it's parked just outside the Passanno Paint factory and store on 5th Street. The site was once an eight-building mill complex. Founded by one James Roy, the mill manufactured woolen goods, particularly shawls. My guess is that this rolling pot is a relic from the wool factory and was used for dying or otherwise treating skeins of wool. Of course, when I spotted it, my first thought was, "Hmmm, I could make a lot of soup in that thing."
Posted by Paula Lemire at 7:34 AM 1 comment: 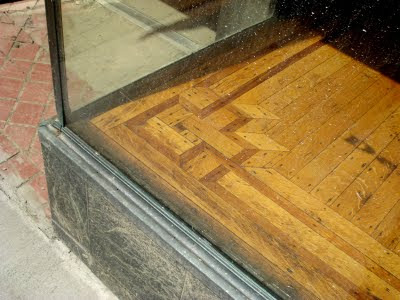 Gorgeous woodwork in a Maiden Lane storefront.
Posted by Paula Lemire at 10:40 AM No comments: 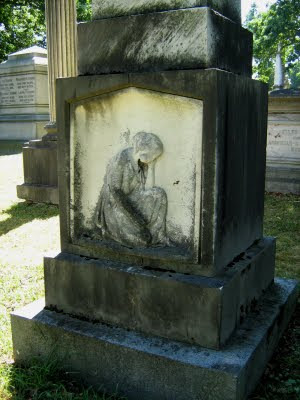 A badly weathered marble relief by Erastus Dow Palmer on the back of a monument in the Albany Rural Cemetery.

The Angel At The Sepulchre
The Sculptor's House
Posted by Paula Lemire at 8:44 AM No comments:

A Turtle In The Sun 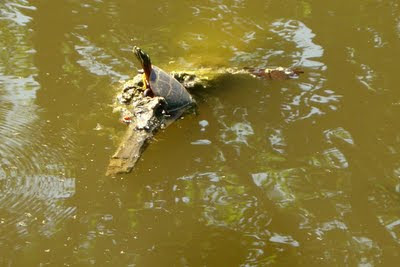 A turtle sunning itself on a bit of debris near the outlet of Washington Park Lake. There were at least two other turtles visible just before I took this photo, but they vanished as soon as they heard me. This one stayed quite a bit longer, cautiously watching as I rummaged in my backpack for my camera and carefully poked the lens through the fence.

Some time ago, I rescued a baby turtle that had stranded itself on the ledge of the dry Moses fountain nearby by picking it up and carrying it over to the edge of the lake. I always look for turtles when I walk along the lake and wonder how mine fared.
Posted by Paula Lemire at 8:04 AM No comments: