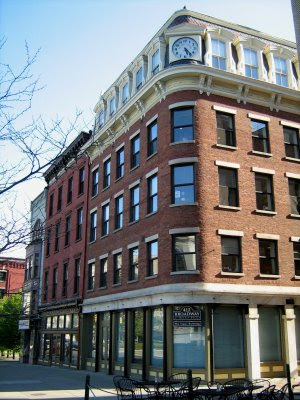 This impressive clock-topped building on Broadway south of State Street was is believed to have been built in the 1830s and expanded in 1871.

It was originally known as a "Law Building" and was home to both shops and lawyer's offices before becoming home to a very prominent newspaper, the Albany Argus. Founded in 1813 by noted agriculturalist Jesse Buel, it was one of America's oldest newspapers and remained in print until the 1920s. A large letter "A" once decorated the building before the clock was installed.

This old section of Broadway and the surrounding streets have a number of distinctive sites, including the ornate D&H Building and the former Hudson River Dayline office, the former Albany bus terminal, and what may be the oldest house in the city...many of which will appear in future posts.
Posted by Paula Lemire at 8:18 AM