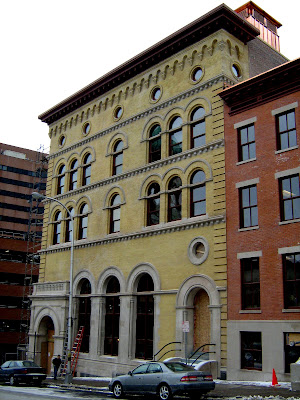 When I was a very young child, this building at the corner of Pine and Lodge Streets housed Albany's Family Court and was, for various personal reasons, a place that I dreaded. In fact, for many years, I would avoid even looking at this lovely Romanesque Revival building at all. I would try not to pass it and looked in any other direction when going to St. Mary's Roman Catholic Church on the diagonal corner.

Fortunately, I'm well over my distaste for the building (and the Family Court has long since moved elsewhere) because it is a handsome structure of pale gold brick and white stone.

Built in 1898-99 as a school (and convent for the teaching nuns) for nearby St. Mary's, it was called Centennial Hall in honor of the one-hundredth anniversary of the first Roman Catholic Church in Albany (see the previous post on St. Mary's).

For the past two years, the building has been undergoing extensive restoration work to convert it into housing and offices for judges. The Times Union has an article details some of the renovations here.
Posted by Paula Lemire at 9:22 AM