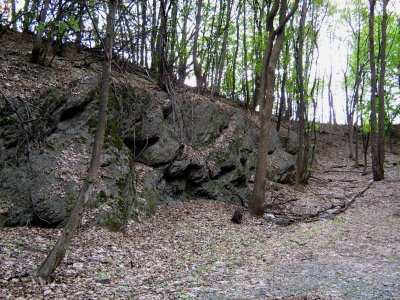 When I first ventured into the Lincoln Park gully, it was strewn with much more litter and debris than it is in these recent photos. Coming into the ravine from the western end, I encountered a slightly shabby blue recliner sitting quite incongruously in the middle of the trail only a few yards from the rickety wooden steps.

From the old wooden steps, one can almost see straight through to the far end of the ravine near Swan Street. Even with a full canopy of leaves, the ravine was much lighter than it seems from the outside.

Even with the light and good visibility, though, there was a tremendous sense of isolation within the gully. Even with obvious reminders of the modern world outside...such as soda cans and plastic bags and glimpses of buildings on the street above...there was real feeling of being totally separate from the rest of the city.

Contributing greatly to this sense of detachment and remoteness were the steep rock walls I recognize from that old family photo. The rocks are smudged with green mosses and lined with diagonal ridges which seemed to have been caused by rushing water.

And the sound of rushing water is much clearer once you're in the ravine. It comes from a heavy metal grate near the center of the trail.

Over the years, I'd heard about the various streams that once criss-crossed through Albany...the Patroon Creek, the Rutten Kill, the Normanskill, the Foxenkill, and the Beaver Kill. Most of them have long since been diverted underground...the most notable exception being the Normanskill (which will appear in future posts).

I knew that the Beaver Kill once ran through some part of Lincoln Park, that its Buttermilk Falls once provided water power to nearby breweries. I'd even seen old post cards of the Beaver Kill Ravine in antique stores. But I always assumed it was closer to Dead Man's Hill and never really connected it with the wooded gully across from Hackett Middle School.

But as soon as I found that metal grate...even before I got close enough to peer down into it...I knew I'd found the old Beaver Kill.