A railroad runs through it.... 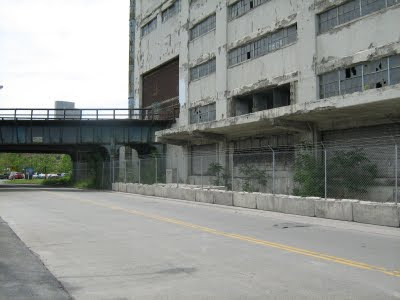 A familiar and quite shabby sight to anyone driving along Broadway or 787 in Albany, the crumbling white structure above is the old Central Warehouse at the corner of Montgomery and Colonie Streets.

Built in the 1920s, this massive derelict building was originally a cold-storage warehouse for frozen foods, especially meat. Even in the 80s, when most of the building was already vacant and beginning to crumble, the lower floor houses a small store where one could buy bulk boxes of frozen chicken breasts and the like.

One of the most distinctive features of this concrete and steel warehouse is its very own railroad spur passing right through its second-story. This little branch of the New York Central Railroad allowed cars carrying beef and other products to pull right into the building, unload at an interior platform, and pull right back out the other side.

During the 1980s, a large "Year of The Bible" sign prominently painted on one side of the building caused quite a bit of controversy due to its size.

The building has been vacant for about twenty years now and it's deteriorating. During a recent walk along the east side of the building on a breezy day, we had to dodge a hail of plaster fragments that came showering down.
Posted by Paula Lemire at 4:19 PM