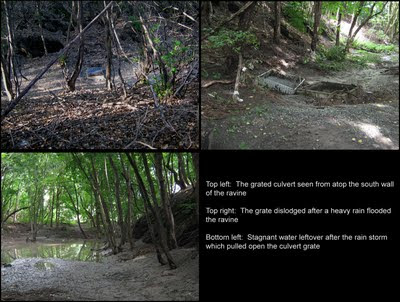 This is the fourth in a series of posts on the Beaver Kill Ravine.

A combination of books and old maps, including one dating back to 1790 helps to trace - approximately - the original route of the Beaver Kill.

The lost river begins its course much further uptown near the present Albany High School campus. When I was a student there, I remember catching a glimpse of running water beneath a storm drain in the main courtyard and I now wonder if that might have been some part of the Beaver Kill.

From the school's vicinity, the stream would have flowed east roughly between Washington and Western Avenues until turning somewhat southward near Quail Street. From Quail, it continued east down Elberon Place and through what is now Washington Park where in now forms part of the lake.

From the eastern end of the Park lake, the stream would have flowed south along New Scotland Avenue before veering sharply to the east beneath modern Myrtle Avenue. The old Albany Penitentiary once stood near the current sites of the Veteran's Administration Hospital and Hackett Middle School.

Across from Hackett, the stream flowed through the Lincoln Park ravine shown above - one of the last visible features of the Beaver Kill - and continued east through the future site of the Park before crossing Broadway at Arch Street and flowing into the Hudson River near the present U-Haul Building.

In the 1880s, a plaque was placed in a curb at the corner of Arch and Broadway noting that the Beaver Kill - "an ancient waterway now arched over" - once flowed through that area of Albany's South End. A cursory exploration of that intersection a few weeks ago turned up no trace of the old plaque. I wasn't surprised that I could not find the plaque since the area has been rebuilt and repaved many times over the decades, but I was still a little disappointed.