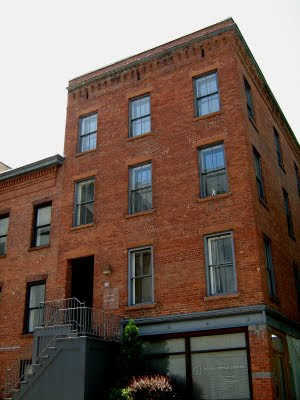 This old brick building, which stands at the corner of Swan Street and Hudson Avenue near the entrance to the tunnels that pass into and under the Empire State Plaza is a piece of personal history.

My great-grandfather was a grocer in Albany long before I was born. He had, at different times, a store on the same block of Madison Avenue which I still live on and one at this corner of Swan and Hudson.

His family lived above the store and the top floor was rented out to another family.

The store was called J. Sharkey Delicatessan - Grocery & Fruit. Don't let the name fool you, though, he wasn't Irish. His name was really Vincenzo Sciacca, but his customers has great difficulty pronouncing it. Apparently, one mispronunciation sounded awfully like sputacchiare, the Italian verb meaning "to spit." Not flattering and, when one Irish lady suggested "Sharkey," he changed the store's name...and his own.

Vincenzo was born in Sicily in 1886 and emigrated to the United States, living first in NYC and then Albany. He began a citizen of the U.S. sometime after the birth of his children as all seven of them are listed on the few naturalization papers I've found in the family files.

If you'd like to see a photo of the store as it looked back them, click here.

I've always found it interesting to look at the details of the old store photos - the piles of fresh vegetables and heavy bunches of bananas hanging just inside the window, the names of the beers (many from local breweries long gone - see the entry about the old Hinckel Brewery), the brand names which still exist today (like Miracle Whip).
Posted by Paula Lemire at 3:27 PM