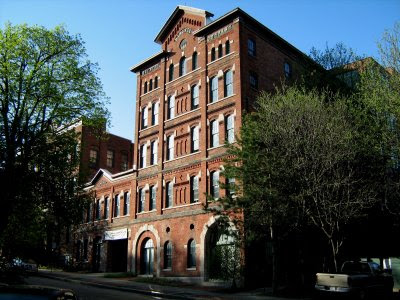 Overlooking Lincoln Park at the corner of Park Avenue and South Swan Street, this handsome brick building was once home to the Hinckel Brewery.

Albany was once home to seventeen different breweries. This one, manufacturer of a sparkling lager, was founded in 1855 by F. Hicnkel and A. Schinnuerer and, by the time Frederick Hinckel died, it was recognized as one of the best-equiped brewing establishments of its time.

The structure pictured was built in 1880 as the brewery's malt house.

The Hinckel Brewery was also known as the Cataract Brewery because it overlooked the rushing falls of the Beaver Kill. (I should mention now that "kill" was a old Dutch term for a creek and it appears frequently in local place names). The Kill's Buttermilk Falls churned especially foamy thanks to run-off from this brewery.

Albany's geology was a plus for breweries. In the era before electricity and refrigeration, the heavy glacial clay soil that lies beneath much of the city allowed for very cool cellars where beer could be stored without spoiling.

The well-preserved Hinckel building has been converted to apartments, but much of the external architectural detail remains intact.

Frederick Hinckel is buried in a beautiful family plot near the ornamental pond on Albany Rural Cemetery's South Ridge.
Posted by Paula Lemire at 12:30 PM