Down to the bones 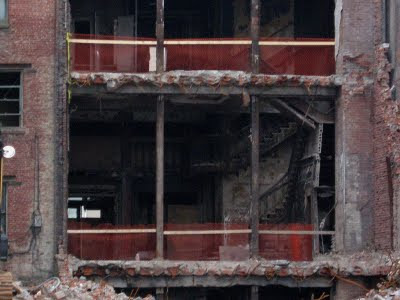 When I was about seven or eight, I recall going to a Christmas party at the Elks Lodge on State Street. Exactly how and why I was going to the Elks Lodge isn't quite clear. No one in the family was associated with the Elks, but at that age, you don't necessarily question that sort of thing and, to be honest, I remember very little about the interior of the Lodge save for a fleeting glimpse of what I believe was an old-fashioned bar of heavy wood.

The exterior, though, has always been a familiar site. A sad one, in recent years as I walked up and down State Street's steep hill (usually en route to Starbucks). The Elks Lodge, with its gorgeous ca. 1913 Beaux-Arts facade, has long since moved from 49 State Street and the handsome building had been falling into disrepair (along with the old Wellington Hotel next to it) for years.

It was earlier this year that work finally commenced on a redevelopment project along this section of State Street now known as Wellington Row. The buildings, including the historic 500-room hotel, are slowly being demolished. However, the facades are being preserved and the intent is to incorporate them into the future structures to be built here.

While walking yesterday behind Wellington Row, I caught a glimpse of the Elks Lodge as it's being torn down. Looking through the chain-link fence at the exposed interior, I could see what's left of what must have been a very fine staircase. The bare bones of a once-impressive building and, no doubt, those will be gone shortly as work progresses.
Posted by Paula Lemire at 3:40 PM