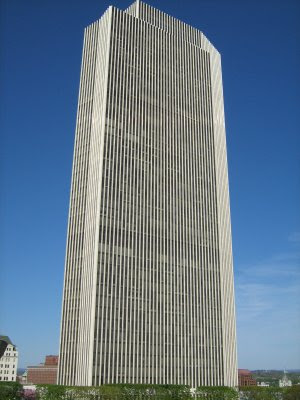 The Corning Tower is Albany's most visible landmark. Rising 589 feet above the Empire State Plaza, it's rather hard to miss it.

The tower of glass and Vermont Pearl marble was designed by architects Wallace Harrison and Max Abramowiz and was completed in 1973.

The tower houses several State offices, including Office of General Services and the Department of Health. Its 42nd floor houses an Observation Deck (click here for visitor information) with fantastic views of Albany, Hudson River, and the Catskill Mountains. Unfortunately, there are no windows on the tower's west side...so I can't see my house from there.

Ten years after its completion, the building was renamed the Erastus Corning Tower after the man who served as Mayor of Albany from 1942 until his death in 1983.

It's hard to sum up Mayor Erastus Corning II in one or two paragraphs. I was only nine when he passed away, but I remember seeing him around Albany and I heard a great deal about him from my great-aunt who had once worked for his family's insurance company. He was supposedly the long-serving mayor in the United States, having served ten consecutive terms. The Albany County Hall of Records has a brief bio of him and I also recommended Paul Grondahl's biography, "Albany Enigma."
Posted by Paula Lemire at 12:14 PM