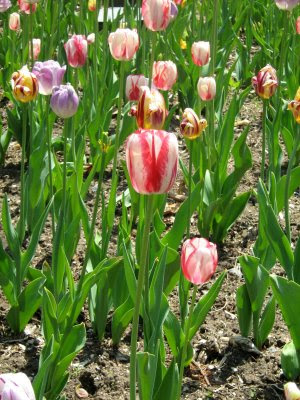 This time of the year, you can't miss them. The tulips. They're all over the place - in parks, in gardens, in little flower beds along street medians. And, of course, they're the namesake of Albany's big spring event, the annual Tulip Festival which is always held in Washington Park on Mother's Day weekend.

Tulips are a symbol of Albany's colonial Dutch Heritage. Tulip bulbs - which had sparked a massive speculation in The Netherlands in the 1630s - were first brought to Albany by Dutch settlers.

Explored in 1609 by Henry Hudson and chartered as a city in 1686, early Albany was a Dutch trading post known at various times as Beverwyck and Fort Orange. Even after the New Netherland colony fell under English rule, many Dutch traditions persisted into the 19th-century. Even now, remnants of Dutch culture can be found here in place names and architectural styles.

I like tulips, but I've never planted them myself. Perhaps because they've always been so abundant everywhere I look that I never felt the need to. This year, that might change.

These flowers, in various stages of bloom, were photographed in the East Capitol Park this afternoon.
Posted by Paula Lemire at 9:53 PM