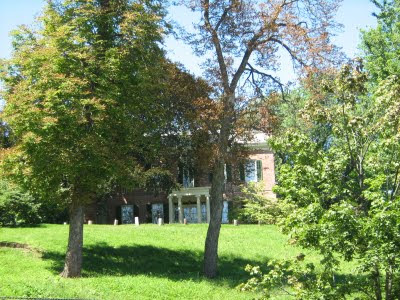 I'm quite ashamed to admit that, despite a lifelong love of local history, I've never actually visited the Ten Broeck Mansion (or the Schuyler Mansion across town...or Cherry Hill). Maybe it's because, when I was growing up, no one brought be there due to the tough reputation of the neighborhoods surrounding each of these historic homes. Maybe I just never got around to going.

Whatever the reason, I mean to make up for lost time next year. Consider it one of my New Years resolutions...to visit all three of the above sites.

The photo above shows the Ten Broeck Mansion on the high ground above the street of the same name. The house was built in the late 1790s when the land was actually part of the Township of Watervliet and leased from the Patron, Stephen Van Rensselaer. Originally called Prospect because of its excellent views of the Hudson River just north of Albany, it was later called Arbour Hill...a name that extends to the surrounding neighborhoods to this day.

(And be sure to check out the wonderful photos of the interior and gardens)
Posted by Paula Lemire at 9:56 AM