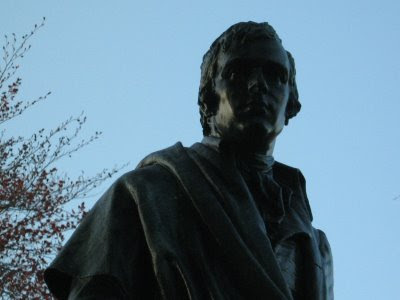 This handsome monument to Scottish poet Robert Burns is one of my favorite features of Washington Park. As a little girl, I loved going to see the statue near the edge of the old parade grounds and examining the bronze panels which depicted scenes from some of his best-known works.

The monument, which was dedicated in 1888, is one of the oldest Burns memorials in the United States and is the work of Charles Caverly. A prominent Albany artist, Caverly studied his art under one of my favorite artists, Erastus Dow Palmer. Caverly also created the beautiful statues of children that flank the entrance to the old State Education Building on Washington Avenue near the Capitol.

The handsome monument was once called The MacPherson Legacy. The story goes that one Mary McPherson was an Albany housemaid. Throughout her life, she saved her earnings to have this memorial erected in honor of The Bard of Caledonia.

Andrew Carnegie, also of Scottish descent, supposedly said that this was the finest monument to Burns he had ever seen.

The memorial is fourteen feet tall with the statue itself measuring a larger-than-life seven feet. The bronze panels which depict "Tam O'Shanter," "The Cotter's Saturday Night," "The Poet Ploughman and the Daisy," and, of course, "Auld Lang Syne."

The monument, which underwent a restoration in the 1990s, is sometimes the site of local poetry readings and other gatherings.

As fair as thou, my bonnie lass,
So deep in luve am I;
And I will love thee still, my dear,
Till a' the seas gang dry.

Till a' the seas gang dry, my dear,
And the rocks melt wi' the sun:
I will love thess till, my dear,
While the sands o' life shall run:

Click here for a full-length view of the monument.
Posted by Paula Lemire at 10:05 AM