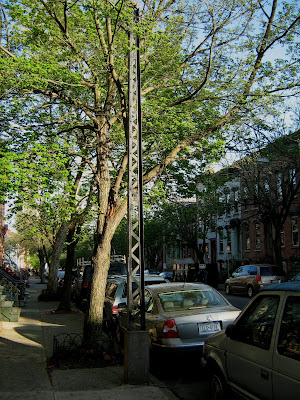 This metal pole on Hamilton Street just below Lark Street is one of the last visible relics of Albany's trolley system. A plaque attached to the pole dates it to the 1890s when the electric trolleys replaced the horsecars. The new trolley system gave Albany residents greater mobility and encouraged the city's expansion.

In 1901, a strike crippled the trolley system in a number of cities, including Albany. The United Traction strike was serious enough to result in martial law with soldiers riding every streetcar to protect riders and the replacement workers. During the course of the strike, there were at least two fatalities. Click here for an old New York Times article on the negotiations to settle the strike.

The Albany trolley system ran until 1946. The other surviving pole can be found on Quail Street near Western Avenue and a stretch of intact tracks runs downhill along Hamilton Street just east of the Empire State Plaza. And, from time to time...when pot holes or road crews tear up sections of pavement along other streets, sections of tracks appear.
Posted by Paula Lemire at 8:24 AM