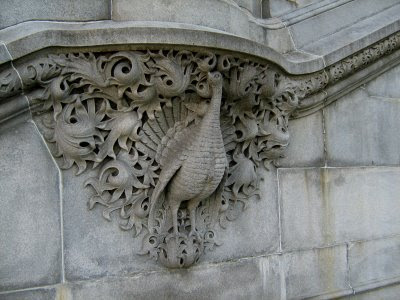 If Benjamin Franklin had his way, the turkey...not the bald eagle...would have been our national bird. Some years after the official adoption of the eagle as a national symbol, he wrote to his daughter:

"I am on this account not displeased that the Figure is not known as a Bald Eagle, but looks more like a Turkey. For the Truth the Turkey is in Comparison a much more respectable Bird, and withal a true original Native of America... He is besides, though a little vain & silly, a Bird of Courage, and would not hesitate to attack a Grenadier of the British Guards who should presume to invade his Farm Yard with a red Coat on."

This turkey - sadly bereft of his beak, no doubt from a century of exposure to the elements - decorates the side of the massive staircase on the east side of the New York State Capitol.

The chateau-like Capitol, which was completed in 1899, is decorated inside and out with numerous carvings which range from anonymous decorative heads, historical figures such as Henry Hudson and Joseph Brant, and animals such as lions, dogs, buffalo, and, of course, this turkey.

Oh, and the opposite side of the staircase features a matching carving of...an eagle.
Posted by Paula Lemire at 8:41 PM