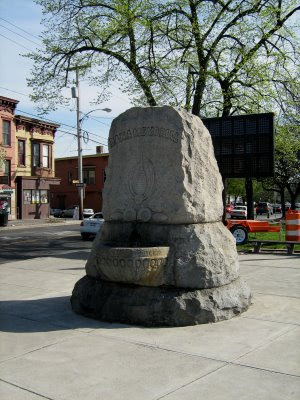 This stone fountain stands in a little park where Delaware Avenue and Lark Street split just south of Madison Avenue.

Growing up just around the corner of it, I was always told that the fountain - which was, at that time, unused - was for watering horses in the era before automobiles. Once the fountain was restored, seeing mounted police watering their mounts there supported that story.

But, according to Albany Architecture (edited by Diana S. Waite, published by Mount Ida Press in 1993), the fountain was originally intended for human use "with the hope that children drinking here would be led to drink of that other stream - the stream of science."

The fountain honors a scientist. Its actual title is the James Dwight Dana Memorial Fountain. Born in 1813, James D. Dana is considered to be one of this country's first geologists and was widely recognized as an expert in prehistoric zoology - hence the trilobites and other fossils carved into the 1903 monument.

The monument, with its fossils and water basin, was erected by the Dana National History Society.

In addition to this handsome fountain, Dana is commemorated by Mount Dana and Dana Meadows in the beautiful Sierra Nevadas, Dana Passage in Puget Sound, Dorsa Dana (a lunar geological feature), a crater on Mars, The Dana Medal of the Mineralogical Society of Albany, and, right around the corner from this monument, Dana Avenue here in Albany.
Posted by Paula Lemire at 8:43 PM