End of The Line 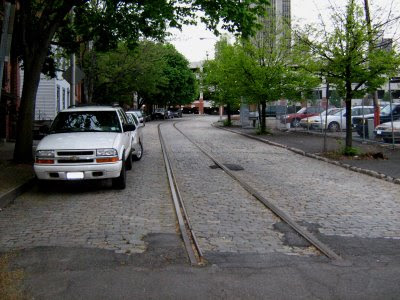 As I mentioned in my previous post, Clang Went The Trolley, trolleys were a mainstay of transportation in Albany from the 1800s until the lines were discontinued in 1946.

If you know where to look, you can find a few remnants of the old trolley infrastructure. There are the two poles mentioned in the above mentioned posted - one on Hamilton Street between Lark and Dove Streets and one on Quail Street south of Western Avenue. The tracks are still there, too. In many cases, they were not removed and merely paved over. They're sometimes visible when seasonal potholes split open the streets.

But there's also an intact stretch of tracks just around the corner from the popular Italian restaurant, Cafe Cappriccio. Running downhill on a quiet stretch of Hamilton Street below the Empire State Plaza, the tracks and old paving stones reach from Phillip Street to Grand Street.
Posted by Paula Lemire at 7:42 PM