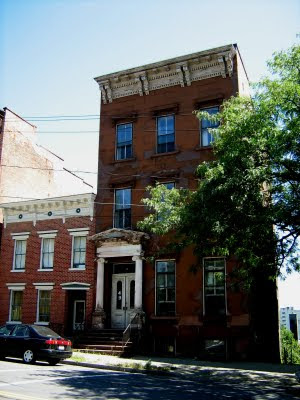 I knew someone who grew up in this house in the 50s and 60s after moving from the Carolinas at a young age. He had written an account of his childhood and his close relationship with his sister who later died of AIDS in a notebook and I typed the manuscript for him. Sadly, I lost his contact information when my laptop crashed last year. His story was unfinished at the time I typed it and I'd love to know how it really ended.

After working on that manuscript, I decided to look for the house based on his description of a white-columned brownstone and, once I located it, I just had to do a little research. The house, which stands on Ten Broeck Street (see my previous blog about another house is this area), was built in 1859 by a George Dawson who was associated with the venerable Albany printing and publish firm of Weed, Parsons, and Company.

My friend told me the house was haunted. He and his sister were afraid to go up to the top floor because there was a ghost there. To him, the man in the metal helmet looked like a conquistador. But I'm wondering if this ghostly resident of 49 Ten Broeck might not have been a 17th-century Dutch soldier from one of the earliest forts. Exactly how and why a ghost from the 1600s found his way to the upper floor of a house that wasn't built for another two hundred or so years, I don't know. But it does make more sense that a Spanish conquistador haunting an upstate New York row house and the metal helmet makes me think of Dutch soldiers helmets I've seen in local museums.

(Yes, I do believe in ghosts. Not because I'm superstitious or want to believe, but because I've experienced hauntings often enough to convince me.)

The house is not in the best of shape now. The brown sandstone was cut and laid vertically which, unfortunately, leads to large pieces flaking away. The Cathedral of the Immaculate Conception across town suffers from a similar problem and is currently undergoing a massive restoration. The house's white columns are also showing signs of rot. But the last time I walked by, I was cheered to see that the old place is no longer vacant. The windows were open and one had a building permit pasted to the glass and a worker was moving around inside.
Posted by Paula Lemire at 9:15 AM