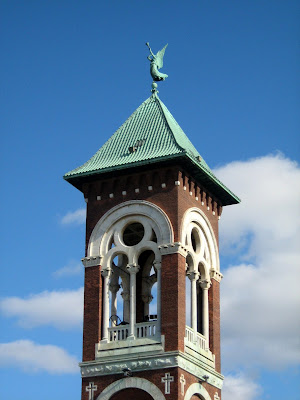 The Angel Gabriel atop the 175 ft. spire of St. Mary's Roman Catholic Church is one of the most recognizable features of the downtown Albany skyline.

Not only is the Angel quite a lovely site from any angle, it's also a working weather-vane.

St. Mary's is one of the area's oldest churches having been founded in 1797, but its history goes back to a 17th-century Dutch barn that previously occupied the lot at the corner of present day Lodge and Chapel Streets. When St. Isaac Jogues escaped from his first captivity among the Mohawks, it was at that barn (Jogues, a French Jesuit missionary, was killed by Mohawks a few years later).

This beautiful building is not the original St. Mary's, but the third. The first was built in 1797 and its original cornerstone is preserved in the current sacristy. The second church was built in 1808 by Albany's leading architect Philip Hooker and its original corner stone is preserved in the current sacristy. When that building and the Marquis de Lafayette attended Mass there during his visit to Albany. The current building was erected under the supervision of Father Clarence Walworth.