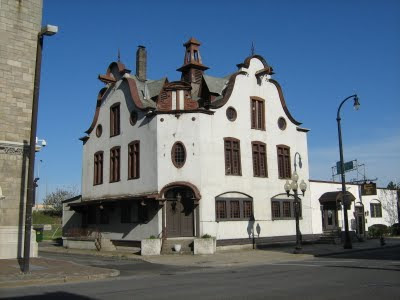 If this building on Broadway wasn't so distinctive, it would be completely eclipsed by the adjacent Delaware & Hudson and Albany Evening Journal (now SUNY offices) building with its lacy Gothic trim and elegant spires.

Built in 1907 and designed by architects Charles G. Ogden and Walter van Guysling, it housed the ticket offices of the Hudson River Day Line. The Day Line provided transportation between New York City and the Albany area and it was considered one of the most successful passenger steamboat services of its era.

The charming building with stucco walls and baroque gables originally stood 100 feet to the north along Broadway, but was moved with the massive Delaware & Hudson Building was constructed.

The building has housed a succession of restaurants since the 1960s. I remember one was called L'Auberge, though I never ate there. The building has been been dark for a while, but a sign I spotted a few days ago announces that it's re-opening next month.
Posted by Paula Lemire at 10:19 AM