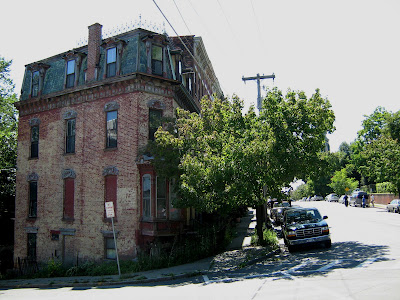 Though it's a bit out of my way, the Ten Broeck neighborhood is one of my favorites. In the heart of the old Arbor Hill, this area contains some of the most interesting old buildings in the city...the empty, but magnificent St. Joseph's Church, the Ten Broeck Mansion on the hill that gave the district its name, and rows of handsome 19th-century houses.

Many of the old houses along Ten Broeck Street have fallen on hard times. Windows are covered by boards, cast iron railings are rusting or missing, stone facades crumbling. One old brick building (which will appear in a future post) is nothing but a facade now.

But, to my delight, some of these old houses are being restored. Work permits are posted in grimy windows and piles of wood and tools can be glimpsed through open doors. Last winter, my friend and I got a peek inside one restoration-in-progress along the 100 block. The Victorian townhouse was being stripped done to the barest of bones. Brick walls had been stripped of all plaster, sub-floors were exposed, windows removed. But one still got a sense of the house's original elegance in the steep narrow stairs with their heavy newel posts and dark wood banisters and the graceful arch dividing the two main rooms on the first floor.

The 1873 house pictured above stands at the corner of Ten Broeck Street and the steep hill of Livingston Avenue. In fact, the steepness of the hill contributed to an accident - a streetcar once lost control while descending towards North Pearl and struck the house, though no evidence of that damage remains.

It's a fanciful house with a slate-covered mansard roof, lacy cast iron trim, a lovely window on the narrow fifth wall, and light fixtures in the shape of bats' wings flank the front door. Built as a private house, it later served as a rectory for the nearby Church of the Holy Innocents (now closed). And it stands opposite the much older Ten Broeck Mansion, home to a number of prominent Albany families over the centuries.
Posted by Paula Lemire at 10:11 AM