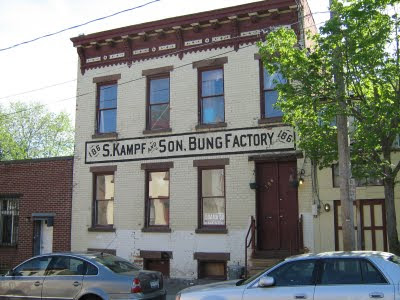 This 1850s building along Jefferson Street always stands out with its painted sign to announce its original purpose.

S. Kampf & Son manufactured the cork stoppers used to seal barrels and casks. The biggest customers for these cork bungs would have been Albany's breweries so the location of this factory couldn't have been better. Only a few very short blocks to the south stood the only Hinckel Brewery overlooking the Beaverkill and another brewery once stood just blocks to the north on Dove Street.

Given the popularity of beer and the well-established presence of breweries in 19th-century Albany, S. Kampf & Sons would have had a lucrative business until the rise of aluminum barrels replaced the wooden ones and ended the need for bungs.
Posted by Paula Lemire at 8:59 AM