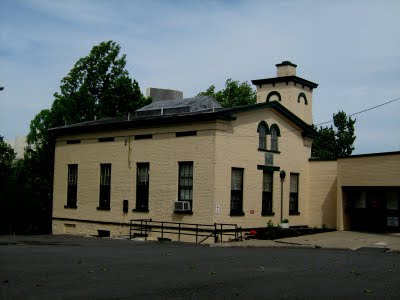 Perched on a steep hill, quite close to the Thomas O'Brien Academy of Science and Technology and the Lincoln Park playground, this pale yellow brick building was once the workplace of the noted 19th-century geologist, James Hall.

The laboratory overlooks the Lincoln Park pool to the east and, just to the north, the remnants of the Beaver Kill Ravine (see my previous two posts here and here). From the latter came the estate's name, Beaver Park. While Hall and his family actually resided in another house which stood on the present site of the Lincoln Park tennis courts at the corner of Delaware and Morton Avenues, he spent much of his time at and was most at home in this laboratory and often slept there in a simple, small bedroom.

A plaque on the south facade sums up the building's history.

This building was erected by JAMES HALL State Geologist of New York 1836-1898
For fifty years it served as his office and laboratory and from it graduated many geologists of merit and distinction. During most of that period it was an influential and active centre of geological science in this country. Erected by The Association of American State Geologists 1916

Designed by Andrew Jackson Downing and Calvert Vaux (two leading architects and landscape designers of their day, Vaux worked with Frederick Law Olmstead on the design of New York's Central Park), the building housed Hall's drawings and extensive collections of fossils and other specimens which are now a part of the NYS Museum just north across the park.

The laboratory, now renamed the Sunshine Building and painted a buttery yellow, is now part of the Albany City School District.

Click here for a short profile of Professor Hall.
Posted by Paula Lemire at 8:46 AM