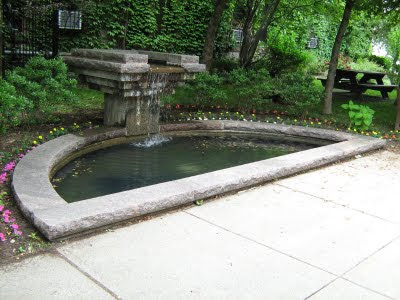 I've mentioned Erastus Corning before in my post about the namesake tower on the Empire State Plaza.

Tucked behind City Hall is a small park bearing his name, too. Given how long he served as Albany's Mayor (over forty years), the shadow of City Hall is a good place to memorialize him.

The centerpiece of the little park - a lovely place to sit for a few minutes after a hot day of exploring downtown - is this fountain. The water flows from the basins shown here and drains into a lower basin across the path. The edge of the lower basin is marked with a plaque.

The park was dedicated in 1987, four years after Corning's death.
Posted by Paula Lemire at 8:42 AM