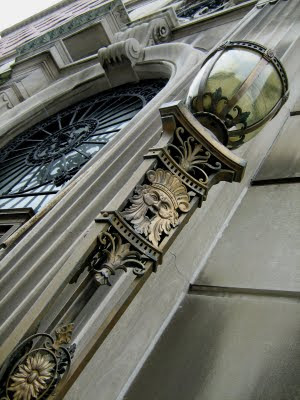 I've walked past the old De Witt Clinton Hotel many, many times. But it was only yesterday that I noticed the laughing faces on the ornate lamp posts flanking the main entrance on Eagle Street, just south of State Street.

The De Witt Clinton Hotel dates from the late 1920s and was designed by architects C. Howard Crane and Kenneth Franzheim. Several books mention that the lobby features murals of early Albany history, though I've never seen them for myself and don't know if they're intact.

The laughing faces on the lamps are rather appropriate since the building (long since converted to apartments) currently hosts a comedy club.
Posted by Paula Lemire at 8:19 AM