From Jail To Synagogue 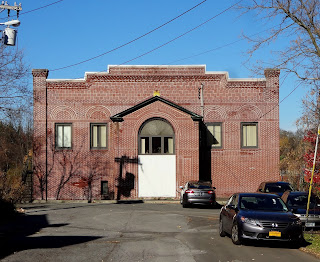 This modest little brick building at the far end of Federal Street off Delaware Avenue was erected in the 1930s as a synagogue for the Sons of Israel (a congregation which would later merge with others to form Temple Israel).  I remember this building being vacant when I first noticed it in the mid-1980s, but it now seems to be occupied by a business.

A fascinating detail about this building is that it was constructed from bricks recycled from the demolition of the Albany Penitentiary.
Posted by Paula Lemire at 7:23 AM