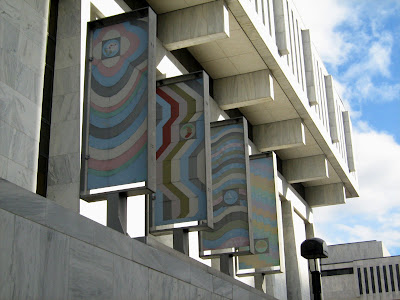 When I was little, I spent a lot of time exploring the then very new Empire State Plaza, inside and out. But it wasn't until I was in my teens that I realized what the point of these rainbow-hued panels near the Plaza's north end represented. Previously, I'd just never noticed the little symbols amid the waves of color...the State flower (rose), the State animal (beaver), the State bird (bluebird), and the State tree (maple).

The almost psychedelic colors have faded a great deal and the symbols are becoming harder to see. And the panels, which are directly behind the Legislative Office Building, look rather dated now. Very 70s, but still rather groovy in their own way.
Posted by Paula Lemire at 7:37 AM