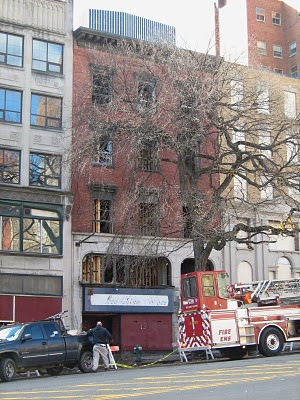 The headline that really caught my attention yesterday morning was the one about the fire on State Street. I immediately recognized the building as a part of the old Wellington Row; it's located immediately to the left of the former Wellington Hotel itself.

I remember that a Chinese restaurant occupied the ground floor of the building until at least the mid-1990s. I don't think I ever ate there, but recall passing the window with its faux-rock display very often.

I knew the building appeared to be historic...or, at the very least...quite old. But with its much simpler style, it was overshadowed by the other buildings in the Row like the ornate Elks Club a few doors up and the intriguing Chatham on its left.

A bit of quick research told me that the burned building was built in 1832 and is called the John Taylor Cooper House. It's also one of the oldest buildings on State Street, along with a pair of earlier buildings directly across the street. Born in 1798, Cooper was a wealthy and well-connected attorney.

I took a walk downtown at noon yesterday to see how much damage had been done to the building (which was already gutted by contractors as part of the stabilization of Wellington Row). Fire trucks were just leaving and clean-up crews just arriving when I took the photo above.

Of course, I also wanted to check and see if the stone faces on the adjacent Chatham had been damaged by the fire or hoses. Fortunately, they're just fine because I really like those mysterious faces. Especially the one on the right.
Posted by Paula Lemire at 10:19 AM