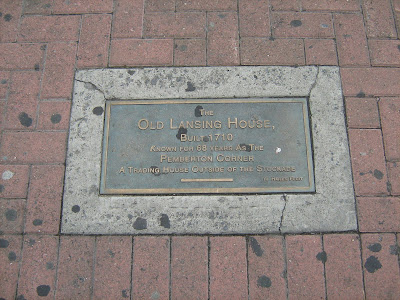 Laid into the sidewalk at the corner of North Pearl and Columbia Streets, this plaque (a reproduction of a now lost Bicentennial tablet from 1886) is spotted with old gum, stepped on constantly, and often littered with cigarette butts.

It marks the location of a house built in 1710 by Colonel Jacob Lansing. Located just north of the stockade enclosing colonial Albany, it served for many years as a trading post for local Native Americans. By 1818, it had become a store maintained by one Eben Pemberton, hence the corner's name.

Photos of corner from the early 1880s show the Lansing House as a steep-gabled structure typical of early Albany. Signs painted directly on its walls advertise Pemberton's as a marketplace for provisions, family stores, and groceries. The original interior was described as having no two rooms on the same level (one had to step up or down when going from one chamber to the next) and fireplaces jambs decorated with painted porcelain Biblical scenes.

The Old Lansing House was torn down in 1886, ironically during the same year in which the City commemorated its Bicentennial and marked the spot with a plaque.
Posted by Paula Lemire at 10:28 AM