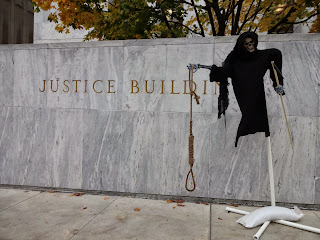 This ghastly Grim Reaper appeared quite suddenly on State Street on Saturday evening.  And I do mean suddenly.  He wasn't there when I walked down this street on the way to an ATM two blocks away, but was there when I came back up the hill just a few minutes later.

I'm not sure if the figure - placed by the Justice Building at the Empire State Plaza - was intended as a protest or a prank or a decoration.  But it was quite seasonably spooky on a October evening...and gone by early the next morning.
Posted by Paula Lemire at 8:12 AM