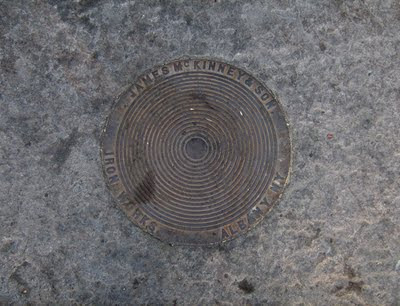 This metal disk is set into an older flag of sidewalk just outside the famous Jack's Oyster House on lower State Street. The name McKinney was the first thing that caught my eye since I enjoying spotting examples of his cast iron architectural elements on old facades around Albany. But, since it's far too small to be a manhole cover, I couldn't quite place what this was...at first. Recently, I realized I'd seen similar examples in Manhattan...coal covers. These iron caps covered sidewalk hatches through which coal was delivered to basements in the 19th and early 20th centuries. Some coal hatches were designed to double as vault lights.
Posted by Paula Lemire at 7:42 AM