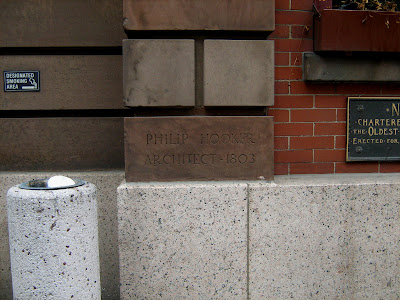 One of the most notable facades along lower State Street in Albany is that of the Bank of America, founded as the New York State Bank. Incorporated in 1803, it was one of the first banks in the young nation and the architect commissioned to design its headquarters was Philip Hooker.

Hooker was one of the leading architects of his era and his designs were a prominent part of Albany's 19th-century streetscapes.

Other surviving Hooker buildings include the former Albany Academy for Boys building in the center of Academy and Lafayette Parks, the Dutch Reformed Church on North Pearl Street, and 96 Madison Avenue. Number 2 Elk Street and the Fort Orange Club on Washington Avenue are also attributed to him.

Here on the old New York State Bank facade, one can find the cornerstone carved with his name, somewhat ignominiously half-obscured by an ashtray.
Posted by Paula Lemire at 9:25 AM