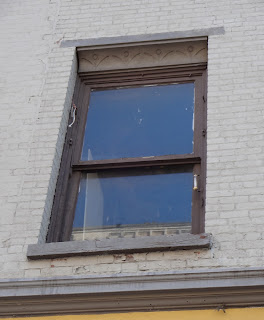 This building at 59 North Pearl Street is best known these days as the former site of Jillians.  But the structure itself (obviously with some alterations) has an interesting history well beyond the former nightclub.  It was built around 1792 by a local merchant, Goldsbrow Banyar.  From 1819, it was the home of Governor DeWitt Clinton.  He died there in 1828, a fact noted by a plaque in the sidewalk outside.

The building has been heavily altered over the years, including the addition of a fourth floor and the large storefront.  But there are still some wonderful older details along the building's Steuben Street side and, on the Pearl Street facade, the windows still boast elegant old lintels like this one.