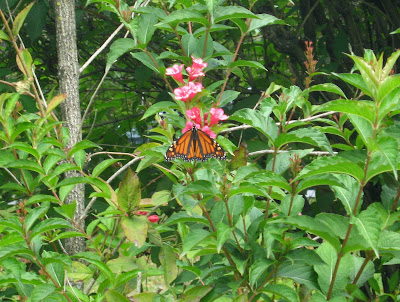 According to my calendar, it isn't officially autumn until I've had my first Pumpkin Spice Latte (and matching muffin) of the season. It's my personal rite of fall. But with the recent unseasonably warm days followed by a couple of days of drenching rain and high winds, I didn't indulge in that little ritual until this morning. It was clear and cold and breezy. Perfect Pumpkin Spice weather.

I took a break from putting the final touches on a book I've been working on for at least ten years and headed off to Starbucks with a friend.

On the way home, I was surprised to see a very large and very vivid Monarch butterfly alight on a bush along the edge of Washington Park. The second gorgeous butterfly I've seen so close this summer, it stayed on the flowers long enough for me to take a half dozen pictures. But, with the breezy and my less than steady aim, only this one...the last one...turned out well.
Posted by Paula Lemire at 12:35 PM