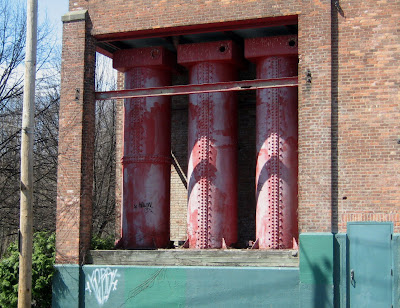 A trio of enormous pipes at the old City Fuel & Ice Company building at the corner of Swan Street and Park Avenue.

The old Fuel & Ice Company stands next to the former Hinckel Brewery complex and just across the corner is the eastern entrance to the Beaverkill gully in Lincoln Park.

A family member told me an unpleasant story about this place which used to supply ice to local restaurants. One day, a large rat was found embedded in a block of ice. Rats weren't too uncommon in Albany, especially around the breweries and buried streams. Rather than discard the block, the workers merely chiseled out the dead rodent and sold the remaining chunk of ice to a restaurant.
Posted by Paula Lemire at 8:28 AM