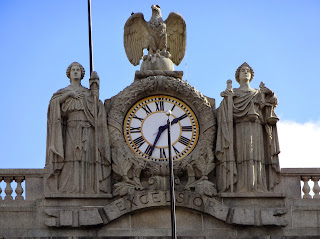 A closer look at the impressive clock atop Union Station on Broadway.  The large clock is framed by a heavy wreath, crowned by an eagle, and flanked by the figures of Liberty and Justice (though it's rather interesting to note that this Lady Justice is not depicted with a blindfold as is usual).  A banner below has the State's motto, Excelsior.

This clock is among the many ornate details on the former train station, now also called Kiernan Plaza.  All Over Albany has a nice set of recent photos of the grand interior.