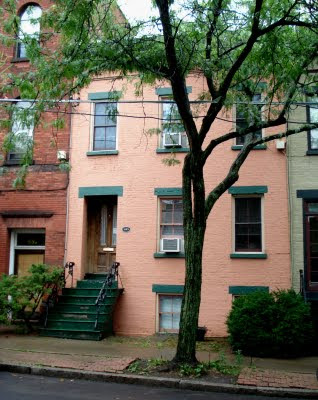 One thing I love about living here is that, almost every day, I come across a place or thing with a connection to history...or a supposed connection.

In this case, it's a peachy-pink brick house at 50 Dove Street.

Erected in 1865 by prominent builder John Bridgford (he was later in charge of the early stages of the Capitol's construction), this house supposedly the home of Arthur John Bright who survived the sinking of Titanic and died in Albany in 1921.

The exhaustive Encyclopedia Titanica, however, lists Bright as passing away in 1955. This house was indeed occupied by a man by that name who is now interred the St. George's Society lot at the Albany Rural Cemetery, but was he the same man who served as quartermaster on the ill-fated Titanic?
Posted by Paula Lemire at 6:51 AM