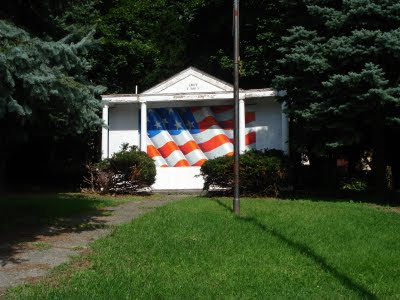 Tucked into the corner of Sheridan Avenue and Dove Street, this fenced plot of grass is home to a memorial which (according to a short 2002 piece in the Times Union) honors residents of Albany's 12th Ward who fought and died in World War II.

I remember driving past this corner often as a little girl. At the time, I didn't really distinguish between memorials and mausoleums. Which led to a rather macabre image of fallen soldiers actually entombed inside, just behind that flag. The flag, back then, was smaller and set against a blue background. I'm not sure when it was repainted, but I recall it was quite shabby when I was young.
Posted by Paula Lemire at 8:27 AM