No One To Play With 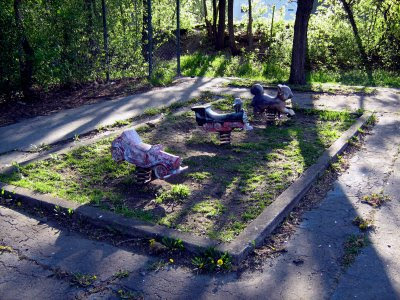 I first discovered this forlorn little playground about a year ago while wandering my way to a local Stewart's shop for some ice cream.

It consists only of these three spring-mounted rides...a vintage car, a locomotive, and a squirrel...on Catherine Street, just uphill from the beautiful and very historic Schuyler Mansion (which, no doubt, will eventually be featured on this blog, too). Nearby, there is a bench and, just beyond the squirrel, a set of metal stairs lead down a steep, wooden hill to a street below.

It's so worn and out-of-the-way that it's very hard to picture children playing here. Whenever I've walked by, the only occupants of this tiny park have been the ubiquitous squirrels and robins.

P.S. This is the first posting to my Albany (NY) Daily Photo blog. As the title says, it will be a daily collection of pictures take in and around my native city, ranging from the random (like this one) to the historic (and, since we're one of the oldest cities in the U.S. and about to celebrate the 400th anniversary of Henry Hudson's voyage up the river that bears his name, we've got plenty of history here).
Posted by Paula Lemire at 8:20 PM